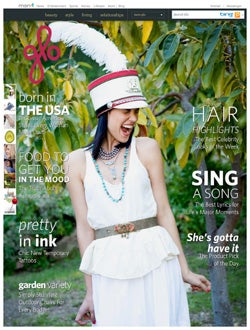 In something of a twist, the site was designed to mimic the look and feel of a big, glossy women’s magazine.

“It combines the imagery and feel of a magazine with the appeal of a dynamic site such as Wonderwall, to offer an online destination that is neither traditional Web nor print, but a unique escape for women on the Web.”

The idea, according to executives, is to “capture the endorphin rush” readers get with oversized magazine photos that “draw in the reader.” Glo is hoping the advertisers will like buying the full-screen ads to run with the full-screen photo galleries, too. (I suppose sites that mimic print will become more common if the iPad takes off.)

The site will feature content from Hachette’s U.S. magazine properties as well as MSN sites like PopSugar, Modelinia and Remodelista. And, of course, Glo’s search is powered by Bing – MSN’s fledgling search engine.

The big question, though, is simple: Does the world need another women’s lifestyle site?

“There is room in the market,” Scott Moore, MSN executive producer and former Yahoo executive responsible for Shine, said during a conference call announcing the launch. “If you look at the lifestyle category, it’s underserved. There are bloggers are playing to this, but in terms of high concept, professionally done media sites, there aren’t many.”

In terms of advertising, he said, “there’s an open field ahead of us.”