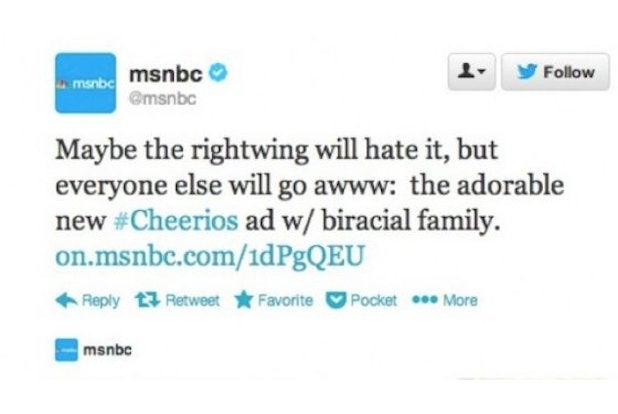 “Maybe the rightwing will hate it, but everyone else will go awww: the adorable new #Cheerios ad w/ biracial family,” MSNBC tweeted Wednesday, referring to an upcoming Super Bowl ad.

“We are deleting the earlier offensive tweet. It does not reflect msnbc’s position and we apologize,” @msnbc tweeted.

It also tweeted: “Earlier, this account tweeted an offensive line about the new Cheerios ad. We deeply regret it. It does not reflect the position of msnbc.”

“The Cheerios tweet from @msnbc was dumb, offensive and we’ve taken it down,” MSNBC.com Executive Editor Richard Wolffe tweeted in response to the controversy. “That’s not who we are at msnbc.”