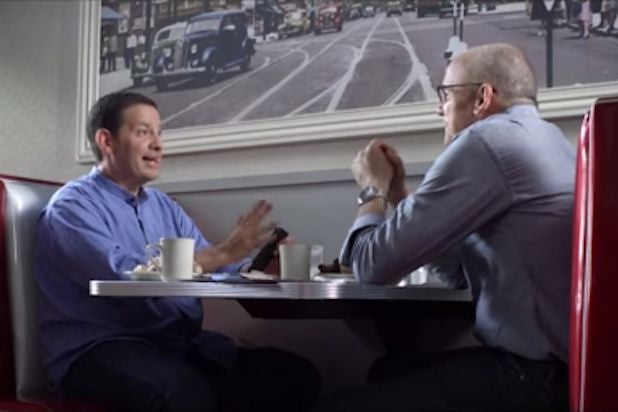 MSNBC’s 6 p.m. timeslot has been open for two months since Al Sharpton was bumped to weekends, and the network is apparently trying to piggyback off of Bloomberg’s political duo of Mark Halperin and John Heilemann to fill it.

According to New York Magazine‘s Gabriel Sherman, MSNBC and Bloomberg are in talks to simulcast the duo’s politics program “With All Due Respect” on MSNBC at 6 p.m. ET This would bump WADR back an hour, from its current time of 5 p.m. ET.

But an insider with knowledge of the talks told TheWrap the major media marriage wouldn’t be for a simulcast, but instead for a re-air of the program on MSNBC after it airs live on Bloomberg.

There are a lot of moving parts to the negotiations as Bloomberg wants it clear the duo originates on its network while the “Lean Forward” network will want Heilemann and Halperin available to them when breaking political news happens, i.e: the stretch run of the 2016 campaign.

Other than increased exposure for Bloomberg’s brand, it’s not clear what the network would gain from a re-air as ratings for MSNBC’s broadcast wouldn’t affect Bloomberg’s 5 p.m. airing.

The most likely scenario is MSNBC contributing to the production cost of the show and/or the duo’s salaries, which are a reported $1 million a piece.

Halperin and Heilemann have been regulars on “Morning Joe” for years, so there’s already a built-in relationship between the two and MSNBC.

If the deal comes to fruition, it enhances MSNBC’s move away from opinion, leaving 7 p.m.-11p.m. the lone four hours for commentary-driven programs.

It would also build an early primetime lineup with a decidedly inside-the-beltway feel featuring Chuck Todd’s “Meet the Press” daily edition at 5 p.m. and “With All Due Respect” at 6 p.m.

It’s a great strategy for short-term election coverage but a questionable one for after Nov. 2016, when cable news history shows political interest wanes, along with ratings.

Both Bloomberg or MSNBC declined to comment to TheWrap’s request.