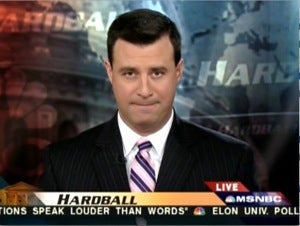 MSNBC has suspended David Shuster indefinitely, less than a week after network executives found out the host taped a pilot for CNN.

A spokesperson for MSNBC confirmed the suspension, but declined to comment on the details.

On Friday, the New York Observer reported that Shuster had taped a pilot with CNN – one that sounded a lot like the morning show concept we reported CNN was testing last month.

MSNBC brass were, understandably, incensed, and met Monday to discuss Shuster’s future at the network while keeping him off the air.

Shuster — who was for a time the regular fill-in for Keith Olbermann — has irked them before. As the Los Angeles Times notes, Shuster used his Twitter feed in January to "harangue conservative activist James O’Keefe" and called a viewer “stupid and lazy.”

During the 2008 presidential campaign, Shuster was suspended after comments he made about Chelsea Clinton, who he said was “being pimped out" by Hillary.

Is MSNBC’s Dave Shuster Angling for a Firing?