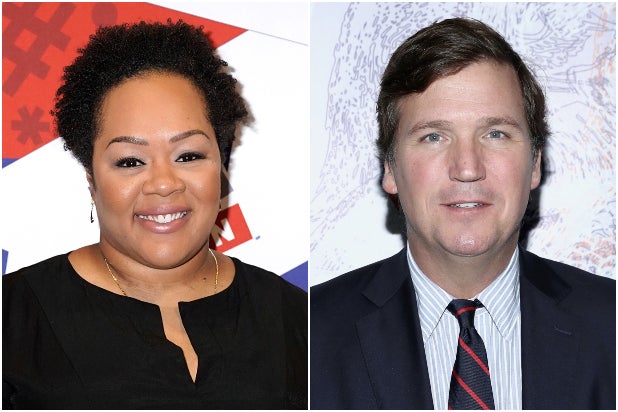 MSNBC contributor Yamiche Alcindor is pushing back at Tucker Carlson after the Fox News host said  she was unable of speaking in a “grammatically correct sentence.”

“I know I’m doing something right when @TuckerCarlson is threatened by my reporting and making baseless claims about bad grammar,” Alcindor said in a tweet Saturday. “As the great Beyoncé said, ‘Boy bye.'”

Friday night, Carlson played a clip of her on-air and then laughed at not just her analysis, but her sentence structure.

“It’s unbelievable on every level. A correspondent who can’t speak in a grammatically correct sentence, A, B the dishonesty of it, framing this as another clever conspiracy by President Trump,” he said of her.

Here’s a snippet of Alcindor’s comments on MSNBC, in which she explains why Trump is continuing the notion that he’s the “number one victim in America.”

“If he gets indicted, even if he goes to jail, he might sell that idea to the millions of people who voted for him, and he might become even more powerful, and that’s what the GOP is really scared about. That’s why you’re seeing not that many people stand up to him,” Alcindor said.

Alcindor, who is a White House correspondent for PBS News Hour as well as a contributor on NBC News and MSNBC, also reported Friday night that the Trump campaign’s strategy to deny the election results has become “more brazen and more bold” over time, with Alcindor citing critics of the president as saying that he is trying to “undo the very foundation of America.”

Watch the segment of Alcindor from “Tucker Carlson Tonight” below:

I know I’m doing something right when @TuckerCarlson is threatened by my reporting and making baseless claims about bad grammar.