NBC News correspondent Geoff Bennett got emotional while reading the “haunting and tragic” final words of Elijah McClain, a 23-year-old Black man killed by Colorado police and paramedics in 2019.

“Based on everything we know about it, there’s no reason for Elijah McClain to be stopped in the first place,” Bennett said. “Somebody saw him walking at night, he had a ski mask on, he said he was cold. It was Colorado, and he said he was anemic and that’s why he had a ski mask on and then he was set upon by police and was drugged by paramedics.”

McClain was stopped by officers while walking home the night of Aug. 24, 2019 after a 911 call described him as “sketchy.” They confronted him and put him in a chokehold, and minutes later paramedics showed up and injected him with ketamine. He was declared brain-dead at the hospital, and was taken off life support just days later.

Bennett then read McClain’s final words aloud, tearing up as he shared them with viewers.

“I can’t breathe. I have my ID right here… My name is Elijah McClain. That’s my house. I was just going home. I’m an introvert. I’m just different. That’s all. I’m so sorry. I have no gun. I don’t do that stuff. I don’t do any fighting. Why are you attacking me?”

Once Bennett finished reading he asked, “If Elijah McClain isn’t safe, who is?” 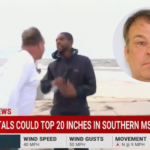