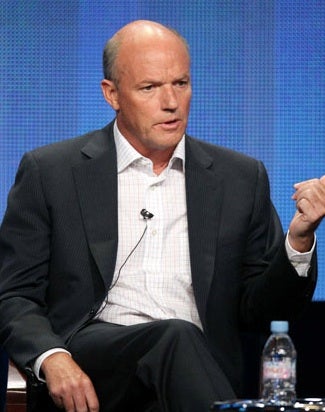 MSNBC was “leaning forward” with wide-eyed smiles in 2012 amid record numbers for the network. What a difference two years makes.

“You can look at the dysfunction in Washington, the wariness about politics, the low approval ratings,” MSNBC President Phil Griffin told Bill Carter of the New York Times on Sunday. “That’s had an impact. But we’ve got to adjust; we’ve got to evolve.”

Also read: MSNBC’s Phil Griffin: ‘We Have a Monopoly on Smart People’

Griffin is now answering questions about his network’s recent slide to third place in the cable news ratings. In the third quarter, MSNBC fell to third in primetime viewers behind CNN and first place Fox News. In the advertising coveted 25-54 demographic, the “place for politics” ranked last in cable news, with CNN sister network HLN ahead of them. Overall, the quarter was the network’s lowest in seven years in total day and primetime viewers.

So what’s a cable news president to do when his lineup — including a daytime roster featuring his hand-picked 26-year-old Rhodes Scholar Ronan Farrow — is bleeding viewers?

“We have a good brand, a strong brand,” he added. “But we’ve got to get outside Washington and open up our aperture a little.”

The network’s woes include a spike in its viewers’ age, morning struggles as “Morning Joe” recently fell back in the ratings behind CNN’s “New Day,” and sliding ratings for network star Rachel Maddow, who  hit a six-year low in the younger demographic in the third quarter. Her lead-in, Chris Hayes, who debuted in April 2013 at 8 p.m. also hit a low for his show in the younger demo.

Hayes’ performance is key to the network as 8 p.m. is the most coveted timeslot in all of cable news. Compared to his predecessor Ed Schultz, who occupied the anchor chair from September 2011 through March 2013, Hayes’ show at 8 p.m. is down 34 percent in total viewers and 30 percent in 25-54 viewers. It has also affected Maddow. Compared to when Ed Schultz was her lead-in, “The Rachel Maddow Show” has lost 23 percent in total viewers and 31 percent in demo viewers.

Hayes’ program “All In” features more reporting and thoughtful analysis than what MSNBC has offered in the past at 8 p.m., such as when the network featured Keith Olbermann and Schultz — two passionate liberals known for their propensity to fly off the handle at any given moment.

If Griffin plans to evolve his network, he’ll have to do it sooner than later. The upcoming midterm elections and sledge into presidential campaign coverage is a ratings sweet spot across cable news.