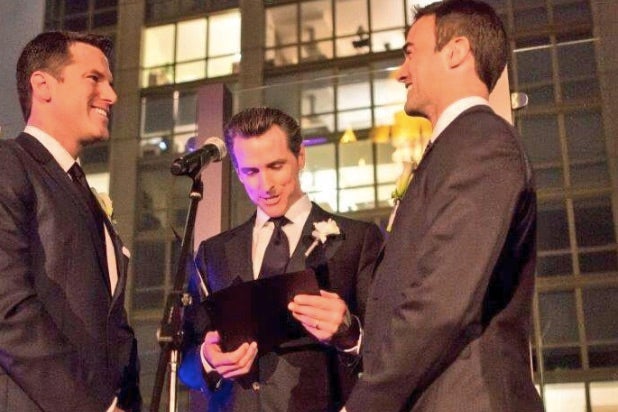 As Hollywood, media and supporters around the country celebrated the Supreme Court’s decision to legalize gay marriage nationwide, Thomas Roberts sat in the MSNBC anchor chair–an openly gay man reporting on the most significant civil rights victory for the LGBT community in modern history.

“It was completely exhilarating because I honestly did not expect it to happen today,” Roberts told TheWrap in an interview Friday. “The adrenaline started to flow when we knew we were going to get something, and it was going to be on marriage equality, and professionally, it was a wonderfully positive story to cover when it comes to advancing our nation with full equality on the front of marriage equality.”

Roberts, who married his husband in New York three years ago, had to walk a fine line between his own excitement and covering the story for MSNBC.

“I’ve been confronted with issues with how to control any bias for a long time, but when it comes to discrimination or issues of inequality, I’ve always been a fan of shining bright lights in dark places,” he said, conceding that the story resonates with him but doesn’t stop him from covering it professionally.

For Roberts, and the rest of the media, inequality and race has sprung back to the forefront as match that sparks the news cycle, ranging from Trayvon Martin’s murder in 2012; Michael Brown and Eric Garner’s murder’s in 2014; and Freddie Gray’s murder in April.

With same-sex marriage now the law of the land in every state, Roberts cautions against declaring the war on homophobia is over.

“There’s still work to be done,” he said, noting we need to make sure those who choose to get married won’t get fired from their jobs or lose housing.

“Efforting and being able to go after your own American dream and having a loving family, that shouldn’t be such an uphill climb and today is such a wonderful indicator of where we’re going as a country and how the constitution is here to serve us all.”

Roberts noted that just like the Loving vs. Virginia decision in 1967, which legalized interracial marriage, didn’t do away with racism, this Supreme Court decision won’t do away with “baked in homophobia and transphobia.”

The GOP candidates also have work to do on the issue if they want a shot at the White House in 2016, Roberts said.

“But for those that have given statements today thinking this is a states right issues, I don’t think, and I don’t many Americans feel the same way, that minority rights need to be put up for a majority vote, and in that case, this really is not a states rights issues.”

“Hopefully we will see candidates on the right emerge that believe in equality.”