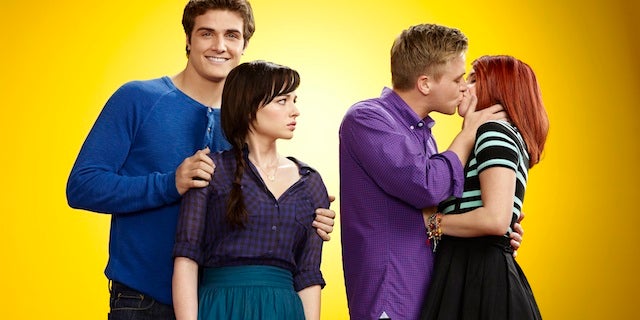 MTV has given its coming of age comedy, "Awkward," a fourth season renewal.

It has also named Chris Alberghini and Mike Chessler ( “90210,” “Cashmere Mafia,” “Are You There, Chelsea?” and “Reba”) as the comedy's new executive producers/showrunners. Season 4 is slated to air in 2014.

They replace former showrunner and "Awkward's" creator Lauren Iungerich, who stepped down from the position at the end of production on Season 3. The second half of the third season will debut in October.

Additionally, MTV has greenlit three new unscriped series. One comes from pro skater-turned-face of MTV, Rob Dyrdek ("Ridiculousness," "Rob Dyrdek's Fantasy Factory"). The other from the executive producer of former hit, "Jersey Shore," and its spinoffs "Snooki & JWoww," "The Pauly D Prokect," and "The Show With Vinny."

See below for descriptions:

“Untitled Virgins Project” – This series follows the lives of young adults trying to maneuver the often tricky world of virginity which includes messy love lives, awkward parental sex talks, sexually active friends, and the pressure to give in to their temptations — all of which can make for a very tumultuous journey. Throughout each episode of this hour-long weekly show, MTV will explore the stories of different v-card-carrying cast members across the country, all dealing with the overwhelming question of keeping their virginity… or losing it. The series will be supported with informational resources from MTV's Emmy and Peabody-winning "It's Your (Sex) Life" campaign, which empowers young people to make better decisions about their sexual health.

“MTV’s House of Food” – In this drama-infused take on food TV, a group of young aspiring chefs with no formal culinary training are put to the ultimate challenge. “MTV’s House of Food” (working title) is a one hour, weekly docu-series that combines the exciting real-life competitive elements of culinary school, with the dramatic setting of a house reality show. The cast has been chosen for their passion for cooking and food culture, and their backgrounds are as varied as their personalities. With three of the country’s best chefs as their teachers and the gastronomically diverse city of Los Angeles as their classroom, this determined group will live together and learn together but only one will win an apprenticeship of a lifetime.

“SNACKDOWN” — From the mind of Rob Dyrdek comes a new cooking competition show, which takes mundane munchies and elevates it to a fully baked art-form! “SNACKDOWN” (working title) is a half hour strip, cooking competition show where a group of amateur chefs battle it out in an array of “snack” inspired challenges. Host Eddie Huang brings his culinary skills and snack-expertise to help guide our contestants through these unique challenges. Then it’s up to our three judges to decide each amateur chef’s fate. The panel consists of supermodel and foodie fanatic Chrissy Teigen, master chef Jason Quinn, and a third judge TBA. The contestants are all vying for a cash prize, their recipe published in the “SNACKDOWN” cookbook, and the coveted golden spork necklace!

“The Ex and the Why” – All too often relationships end with unanswered questions and hurt feelings. In every episode of this half hour strip, someone gets the opportunity to finally get closure and just maybe a second chance at happiness and love. Each brokenhearted participant will walk us through the ups and downs of their failed relationship while our producers lure their ex into a surprise meeting. When all is finally revealed, will the exes get their lingering questions answered? And is there a chance to rekindle their relationship?