Like the broader economy, MTV isn’t out of recession, but the bleeding does appear to have slowed.

Overall viewership on the MTV Networks flagship channel is down only 5 percent year to year over the last seven weeks, after tumbling 14 percent in the second quarter and 21 percent in the fourth quarter of last year. 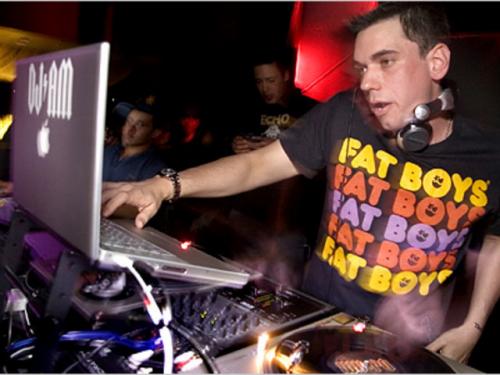 Armed with what MTV development head Tony DiSanto describes as a “new aspirational and optimistic brand filter,” the network — previously known for bling-themed series including “Cribs” and frilly celeb-themed shows like “Run’s House” — has overhauled its schedule of late with weightier, pro-social programs like “16 and Pregnant,” which premiered to 1.6 million viewers last month, a 180 percent uptick for the time period.

On Wednesday, at the Television Critics Association tour in Pasadena, DiSanto was on hand to introduce two more reality series that fit the new, er, brand filter.

The intervention-themed “Gone Too Far” stars DJ AM (aka Adam Goldstein, pictured above), parlaying his own successful addiction recovery to help teens in trouble.

“I have an allergic reaction to drugs and alcohol,” Goldstein quipped Wednesday. “I break out in handcuffs.”

“The Buried Life,” meanwhile, is a kind of “Bucket List” targeted to teens and twentysomethings, with four young Canadian dudes crossing off their own list of ambitious goals (playing basketball with Barack Obama!) while helping others do the same.

“The audience has changed,” DiSanto said. “Right now, the audience is far more aware and far more socially active. Shows like this might have been one-off specials before, but now they’ve really shifted the balance towards being series programming. It’s great to make shows that not only engage viewers, but also inspire them.”

Whether the strategy can re-establish momentum for venerable MTV longterm is still questionable.

Certainly, the network faces challenges. Notably, longtime programming architect Brian Graden is set to depart as president of the MTV Networks Group at the end of the year when his contract expires.

Then there’s a soft advertising market, which is particularly perplexing for a network like MTV trying to reach a market that’s especially unsusceptible to traditional advertising models.

The soft ad market and MTV’s sagging ratings have taken a toll on parent company Viacom. Revenue for the conglomerate declined 14 percent in the second quarter, despite the incendiary box-office performance of Paramount, which enjoyed highly successful premieres in the period with “Star Trek” and “Transformers: Revenge of the Fallen.”