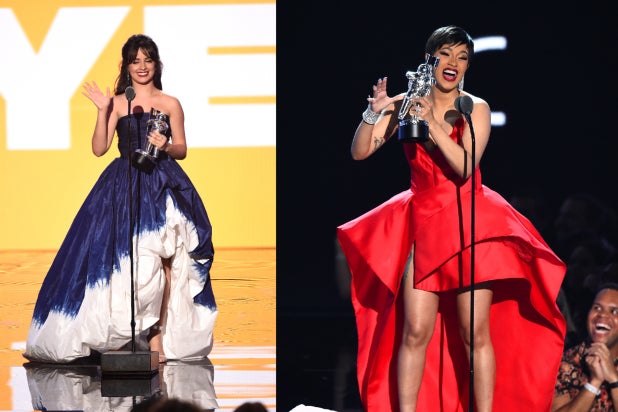 It was a strong night for Camila Cabello at the 2018 MTV Video Music Awards, who took home “moon persons” for both Video of the Year and Artist of the Year.

The awards were spread out fairly evenly among the artists, with Childish Gambino taking home three, while Cabello, The Carters and Cardi B all won a pair of awards each.

Nicki Minaj won Best Rap video for her single, “Chun Li,” while Ariana Grande took home the award for Best Pop video for “No Tears Left to Cry.” Post Malone won Song of the Year for “rockstar” with 21 Savage. A pair of awards were also handed out during the pre-show, one to Cardi B for Song of Summer for her single, “I Like It” with Bad Bunny & J Balvin, and one to Hayley Kiyoko for Push Artist of the Year. As previously announced, Jennifer Lopez received the Michael Jackson Video Vanguard Award during the show.

Also Read: 24 Most Iconic VMAs Moments, From Madonna's 'Like a Virgin' to 'Miley, What's Good?' (Photos)

Towards the end of the show, MTV ran a short video tribute to Aretha Franklin, who died last week. During the presentation for Video of the Year, Madonna gave the Queen of Soul a tribute as well.

See the full list of winners below, including some that were given out during the pre-show:

[Handed out during the pre-show]