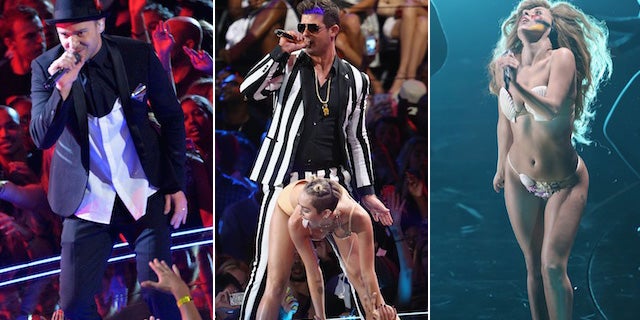 MTV threw its annual bash honoring the year's best music videos during the VMAs on Sunday from Brooklyn's Barclay Center. And TheWrap has its favorite and least favorite moments from the show.

Seattle rap pair Macklemore and Ryan tied with Justin Timberlake for the most moonmen with three awards each. Timberlake was also given the Michael Jackson Video Vanguard Award. Selena Gomez won her first moonman for Best Pop Video.

Taylor Swift, Bruno Mars, Pink and One Direction were among the night's winners, as well.

There weren't any moments that stood out majorly from the show compared to MTV's history of awards show hijinx. There were no band members climbling the set, no naked streakers or anything close to the Swift/Kanye West altercation.

But, there were still some moments that soared and some that fell flat.

The pop queen, whose sheen has lost some luster over the past couple years, performed her new single, "Applause." During the opening of the song, it sounded as if the crowd was booing. Confused viewers wondered if that was really coming from the audience or if it was part of the act. Of course, Gaga's little monsters cleared that up. It was all Gaga. Still, the performance overall was uneven and the song isn't very catchy for a pop song. It would seem that while Gaga can still get them talking, she has lost some of her pop star steam.

2.) Kevin Hart is not the host, but he's clearly a rear end aficionado.

Hart was on-hand for a few transitions on the awards show, but kept emphasizing that he's not hosting the show again. Aside from pointing out that the 'NSYNC guys may have shown they're not as 'NSHAPE as they used to be, he also joked that Joey Fatone was feeling flatulent during the performance. In other rear end news, Hart was a big fan of Lady Gaga's offerings. He brought it up each time he took the stage.

Well, that was unforgettable. Cyrus was making sure we knew that she could shake it with the best of them — even large dancing bears — on her performances of her single, "We Can't Stop" and a duet with Robin Thicke on his sizzling summer hit, "Blurred Lines." The 20-year-old changed from one scantily clad costume to another, practiced some twerking on Thicke and even gave him a fondle or 20.

4.) Macklemore & Ryan get their time in the spotlight.

They're the anti-rappers and we're not talking about race. They rap about being thrifty over wearing designer labels and about giving equal rights to gay people. It's the kind of content that the genre needed and they did it without the help of a major label.

Timberlake has come a long way since his boy band days. Today, he's a legit all of the above — actor, solo singer and dancer. And Sunday's peformance proves that he is worthy to accept an award that bares Jackson's name. At the same time, rumors of a reunion with his 'NSYNC brethren at the awards almost eclipsed Timberlake's award. But, they were really treated like a blip on the radar of Timberlake's career a la Beyonce's reunion with Destiny's Child at the Super Bowl. And, you know what? That's how it should be.

Perry's new single, what she believed to be the mark of her career evolution, has been mired in controversy. First, it was "leaked" early. We're all wondering if it was "leaked" to create headlines. Second, it was accused of being a copy of Sara Bareilles' less popular, though recent, single "Brave." And third, the music video's textual, emoticon style was also accused of stealing the video concept from lesser known Dillon Francis. But, Perry closed the show by staging her performance in a boxing ring. Was it cheesy? Yes. Did it serve a purpose? Yes.