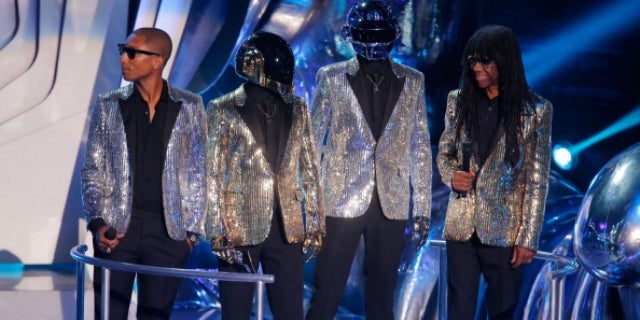 The French duo appeared at Brooklyn's awards show Sunday, as expected, but did not do anything other then stand in silence, in full robot garb, between Pharrell and Nile Rodgers for a few moments. Pharrell and Rodgers presented the "Best Female Video" award to Taylor Swift.

TheWrap's requests for comment from MTV and Daft Punk were not immediately returned.

The pair were originally set to appear on Comedy Central's "Colbert Report" and headline its "StePhest Colbchella" segment earlier this month. But they bailed out at the last moment.

Colbert said that Viacom — which owns both Comedy Central and MTV — didn't want the pair to appear on any of its channels before what was to be a surprise VMAs appearance. In doing so, he spoiled the surprise.

Daft Punk was not billed to perform at Sunday night's awards. But given the build-up to the VMA appearance, many expected they might do more than stand around. There was a teaser that aired during the awards show for the group's new single, "Lose Yourself to Dance," which features Pharrell and Rogers.

Colbert made the most of his unfilled time for "StePhest Colbchella." The comedian danced to Daft Punk's "Get Lucky" with guests including Bryan Cranston, Hugh Laurie, Jeff Bridges, Jimmy Fallon and even Henry Kissinger.