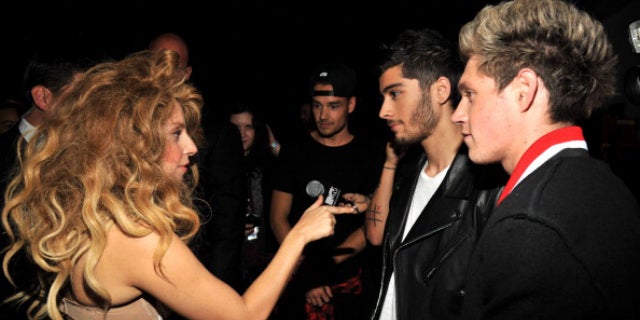 Booing was the subject at hand when Lady Gaga One Direction paid a surprise visit to One Direction backstage at the MTV VMAs Sunday night.

The Lady told the boys why she put canned booing into her performance — "I put that booing in my own show because I wanted to make a comment about that." Then she said she was not pleased with the real booing she thought she heard during the 1D performance.

"You were awesome," she told the boys — who were thanking fans live on MTV.com for naming their "Best Song Ever" the "Best Song of the Summer" — "but if I did hear what I heard out there, I just want to tell you that you deserve every bit of success that you have, and don't let those people boo you."

"I want to leave right now," Gaga continued on what quickly became a rant. "I don't even want to stay any more because I don’t want to be in a room where people were booing."

To which someone in 1D dismissed those non-fans, simply saying, "F— that s—, we don't care."

Gaga then praised the five Brits a little more before they all headed off.