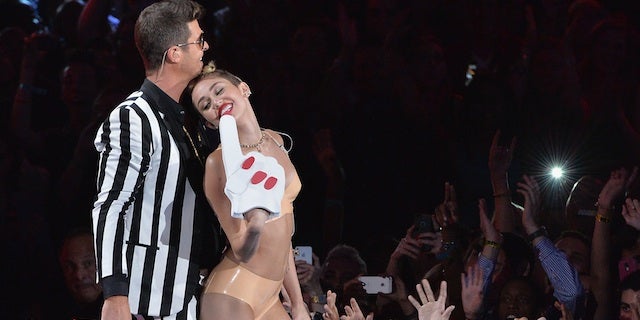 Miley Cyrus and Robin Thicke hit the 2013 MTV VMA stage with their hit songs of the summer.

Cyrus opened the performance with her girl power party single, "We Can't Stop." And it was, um, an interesting sight to behold. She came out to a stage full of giant dancing teddy bears and in a very revealing bustier/hot pant combo. And just to combine her summer song with the summer's dance craze, Cyrus did her best version of Twerking — with a bear.

She then transitioned by pulling off her outfit for a flesh-colored vinyl bathing suit into the opening of Robin Thicke's single of the moment, "Blurred Lines," as he joined her on stage. Furries weren't the only ones who were subjected to Cyrus' brand of twerk either. Thicke got a healthy amount of it, as well. That and some feeling up from the scantily dressed pop star.

Watch the performances below.