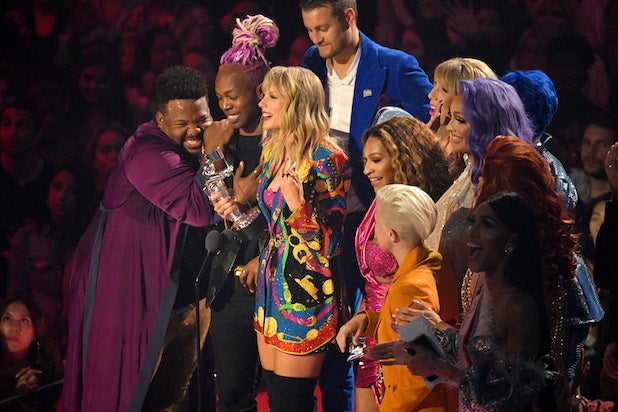 The simulcast of the 2019 MTV VMAs drew 4.9 million total viewers on Monday, the same as it did last year. Among adults 18-49, which is the key demographic for entertainment programming, these Video Music Awards slipped 6% year over year — just like the 2018 version had.

Though that is a fairly modest decline for awards shows these days — or even TV usage in general — the simulcast ratings still means Monday set a new VMAs-record low, according to Nielsen.

But here’s a plus: Among adults 25-54, the VMAs grew 6%. Credit host Sebastian Maniscalco and some Newark nostalgia acts for the older-viewer bump.

Across digital and social platforms, the 2019 VMAs were a clear win. Trending worldwide for 12 hours (and 13 hours stateside). they soared 129% in social engagement and were the most social show of the summer.

Social/video views jumped 85% from last year to 269 million, according to Conviva Social Insights.

Taylor Swift, Ariana Grande and Billie Eilish took home Monday’s top prizes — see the full winner’s list here. And see what we saw inside and outside the Prudential Center here.