They also handed out some trophies at the MTV Movie Awards on Sunday night at the Gibson Amphitheater – but if you think the fact that “Twilight” won a lot is news, you don’t know this particular awards show.

The MTV Movie Awards is a TV show devoted to comedy, parody and irreverence, and one that uses a handful of awards not as a way to honor anybody’s idea of excellence, but as an excuse to gather a bunch of stars and get them to do funny things. 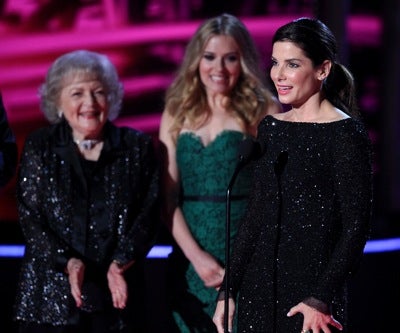 And in the case of Sandra Bullock, it got itself a classic MTV moment, if one that wasn’t quite up there in the MTV awards-show pantheon alongside newlyweds Michael Jackson and Lisa Marie Presley kissing onstage in 1994, or Paul Reubens (aka Pee-wee Herman) making his first appearance at the MTV Video Awards after his 1991 arrest for indecent exposure.

Bullock had appeared at Saturday night’s Spike TV “Guys Choice” awards, but that won’t be televised until later in the month, making her MTV appearance her first TV appearance since the post-Oscar revelations about husband Jesse James’ affairs.

As usual, she was charming and funny and self-deprecating; the good-humored self-awareness that made her such a popular Oscar winner makes her an equally popular recovering spurned woman, helping her to steal a show that was otherwise supposed to be more about irreverence than sentiment. 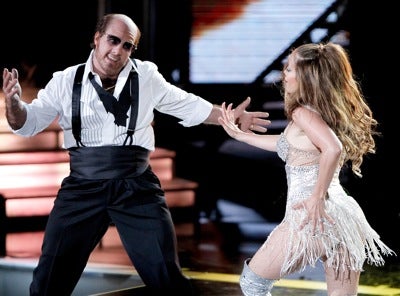 If Bullock supplied the show’s essential water-cooler moment (which, after all, is what the MTV Movie Awards are really about), then runners-up included Cruise’s incessant appearances as Grossman, both in video clips and in an onstage dance number with Jennifer Lopez; the newly ubiquitous Betty White, who was the third person shown during the show after Taylor Lautner and Robert Pattinson; and the DayGlo performance of “California Gurls” from a blue-haired, scantily clad Katy Perry and a typically laid-back Snoop Dogg.

Whether in an onstage appearance by the stars of “The Grown-Ups,” “Dinner With Schmucks” and others, or special showcases of upcoming scenes from “Harry Potter and the Deathly Hallows” (an ad) and “The Twlight Saga: Eclipse” (a segment of the awards), the show, as usual, missed no opportunity to promote upcoming films.

As far as the actual awards went, “Twilight” and its stars won everything for which they were eligible: Best Movie, Female Performance, Male Performance, Kiss and Global Superstar. Accepting the first award of the night, Kristen Stewart trotted out her usual awards-show persona: ill at ease and inarticulate. “I guess ‘Twilight’ is really awesome, and I agree,” she said, unconvincingly. “Woo.” 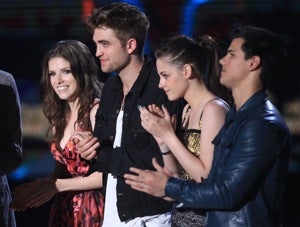 That franchise no doubt helped Anna Kendrick win Best Newcomer over Zach Galifinakis and Gabourey Sidibe; Oscar voters may know Kendrick from “Up in the Air,” and that’s the movie she was credited with on the MTV ballot, but it’s probably a safe bet that MTV viewers (and voters) know her as Jessica in the “Twilight” movies.

One clear sign that the MTV awards – which are voted on by the channel’s viewers – are not like other awards shows came in the Best Villain category, where Christoph Waltz’s winning streak for his “Inglourious Basterds” performance came to an ignominious end at the hands of Harry Potter’s nemesis Draco Malfoy, Tom Fenton.