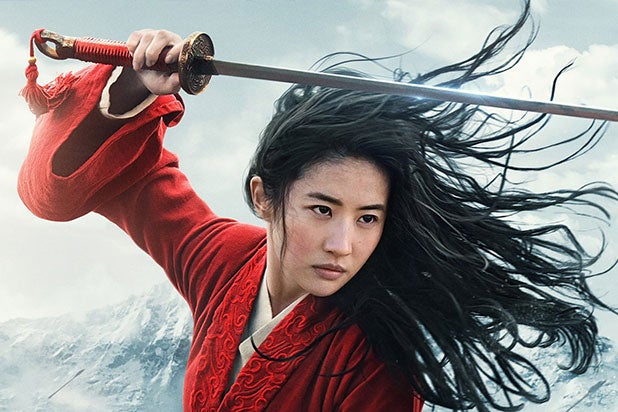 On Wednesday, Sen. Josh Hawley became the first currently serving U.S. government official to align himself with the growing uproar over Disney’s work with a Chinese bureau linked to brutal Uyghur concentration camps during the filming of “Mulan.”

In a letter, posted online Wednesday, the Republican from Missouri accused Disney of “whitewashing of the ongoing Uighur [sic] genocide,” which he said contradicted the “company’s supposed principles.”

The ties between Disney and the Chinese concentration camps were revealed over the weekend when viewers noticed that the end credits specifically thank the Turpan Municipal Bureau of Public Security, which runs security forces in Xinjiang. According to the Washington Post, the organization is directly linked to China’s campaign of oppression against the Uyghurs, a Turkic-speaking, mostly Muslim ethnic minority.

According to PBS, there are at least ine million Uyghurs being held in state-run concentration camps where prisoners are beaten, humiliated by before forced to violate halal dietary rules, and forced into slave labor, according to multiple reports. China’s government is also accused of operating a “mass rape” program against Uyghur women.

In his letter, Hawley suggested Disney’s choice to work with the Chinese government was deeply hypocritical. “Just a few weeks ago, for instance, you wrote about the need to ‘confront the inscrutable idea that the lives of some are deemed less valuable–and less worthy of dignity, care and protection–than the lives of others.’ Elsewhere, Disney has declared its commitment ‘to providing comfort, inspiration, and opportunity to children and families around the world’ and described its ‘commitment to respect human rights” as a “core value,'” Hawley wrote.

Hawley also posed 9 questions, which he asked be answered by the end of September. Among them, he wanted to know if Disney will publicly condemn the treatment of Uighurs and other minority groups in Xinjiang, and if it will donate a percentage of “Mulan” profits “to non-governmental organizations dedicated to fighting human trafficking and the other atrocities underway in Xinjiang.”

Read the full letter below:

The Chinese Communist Party (CCP) is committing genocide in Xinjiang–and
not just cultural genocide either. There was a time when Beijing might have been
satisfied with enslaving Uighurs and other Muslim ethnic minorities, even as it tortured
them into abandoning their beliefs and swearing loyalty to the Party.i But that is no
longer the case. Now Beijing appears intent on destroying the Uighur people. And it has
rolled out a sophisticated campaign to do just that, including by systematically sterilizing
Uighur women and aborting their children.

On August 13, 2018, Walt Disney Studios announced that production had begun
on Mulan.iii By that time, numerous reports had been released by the U.S. government
and non-government organizations concerning the mass internment of Uighurs and others
in camps in Xinjiang.iv But that did not stop Disney from going to Xinjiang to film
Mulan. Nor did it stop Disney from collaborating with the Chinese officials directly
responsible for the atrocities at those camps.

The Mulan closing credits tell the story. Nine minutes into the ten-minute credit
roll, Disney gives “special thanks” to the Turpan Public Security Bureau–the very same
bureau responsible for administering the concentration camps in the Turpan jurisdiction.
Disney also chose to give “special thanks” to several CCP propaganda organs, including
the Xinjiang Communist Party’s publicity department. These agencies are tasked with
spreading disinformation about the atrocities in Xinjiang in order to shield Beijing from
accountability.

Disney’s whitewashing of the ongoing Uighur genocide is contrary to all of your
company’s supposed principles. Just a few weeks ago, for instance, you wrote about the
need to “confront the inscrutable idea that the lives of some are deemed less valuable–
and less worthy of dignity, care and protection–than the lives of others.”v Elsewhere,
Disney has declared its commitment “to providing comfort, inspiration, and opportunity
to children and families around the world” and described its “commitment to respect
human rights” as a “core value.”

How exactly does giving “special thanks” to the officials responsible for
imprisoning, torturing, and forcibly sterilizing millions of people because of their
ethnicities and beliefs align with your supposed commitment to promoting human dignity
and respecting human rights? How does glorifying the Chinese authorities perpetrating
abuses in Xinjiang provide comfort, inspiration, and opportunity to Uighur children–
including those who were never born because the CCP forced their mothers to abort
them? Disney’s actions here cross the line from complacency into complicity.
For nearly a century, Disney has told stories, produced films, and built theme parks that
inspired us, brought us together, and shown us the very best of what America has to offer
the world. Your decision to uncritically approve this film’s release rather than
apologizing to those harmed by Disney’s actions is reprehensible. Your decision to put
profit over principle, to not just ignore the CCP’s genocide and other atrocities but to aid
and abet them, is an affront to American values.

As you contemplate your next steps, I request your answers to the following questions:

1. Does Disney agree that the Chinese Communist Party is responsible for
imprisoning and torturing Uighurs and other Muslim ethnic minorities in
Xinjiang?

2. Why did Disney choose to film portions of Mulan in Xinjiang, despite the fact
that the Chinese Communist Party was imprisoning and torturing Uighurs and
others in Xinjiang at the same time?

3. What assistance did Disney receive from the Turpan Public Security Bureau and
other Chinese government agencies involved in the atrocities in Xinjiang?

5. Has Disney coordinated, collaborated, or otherwise engaged with any of the
Chinese actors that have been designated for sanctions by the Treasury
Department on account of their contributions to the atrocities in Xinjiang?

6. Does Disney condemn the atrocities committed by the Chinese Communist Party
against Uighurs and other Muslim ethnic minorities in Xinjiang?

7. Will Disney sever its relationships with the Chinese Communist Party in response
to the Party’s abuses in Xinjiang, Hong Kong, and elsewhere?

8. Will Disney pull Mulan from Disney+ in order to avoid any further glorification
of Xinjiang or validation of the Chinese Communist Party officials and agencies
responsible for the atrocities in that province?

9. Will Disney donate any of the profits drawn from Mulan to non-governmental
organizations dedicated to fighting human trafficking and the other atrocities
underway in Xinjiang?

Please deliver your responses to these questions to my office by September 30, 2020.
Thank you for your attention to this urgent matter.