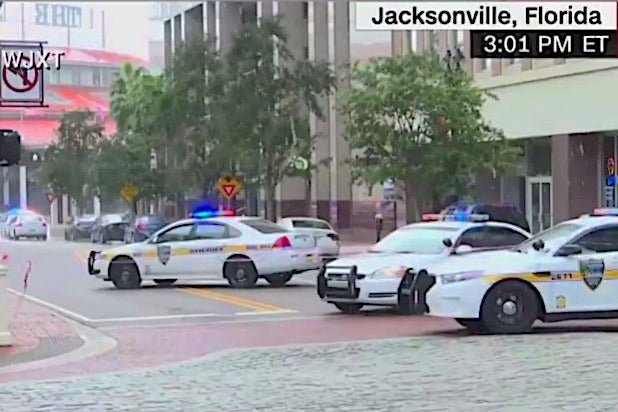 A mass shooting at a “Madden 19” video game tournament in Jacksonville, Florida, on Sunday has resulted in three deaths and 11 injuries, according to the Jacksonville Sheriff’s Office.

Sheriff Mike Williams told members of the media during a press briefing Sunday that at 1:34 ET, they received a 911 call that shots had been fired at Chicago Pizza at the Jacksonville Landing. Authorities arrived two minutes later, at which time they evacuated and locked down the area. A SWAT team and bomb squad arrived shortly thereafter and swept the area.

Three people were found dead at the scene, including the suspect, who took his own life. Nine victims were transported to area hospitals, seven of which had gunshot wounds and two others who sustained injuries while fleeing the restaurant. Two additional people wounded by gunshot transported themselves to the hospital. All are in stable condition.

The suspect, believed to be a 24-year-old man from Baltimore, Maryland, will not be named until his identity is confirmed. They have no other suspects at this time.

Sheriff Williams says at least one handgun was used in the shooting spree.

One suspect is dead at the scene, unknown at this time if we have a second suspect. Searches are being conducted. https://t.co/qBJvkaO7xT

The tournament was being broadcast on Twitch, and live video and audio from the moment the shooting started was caught on video. [Note: The audio may be disturbing]

madden tournament getting shot up on twitch pic.twitter.com/3Jk8QmZkiy

The Twitter page of CompLexity Gaming, an e-sports team that was competing in the tournament, tweeted an update from the event, saying there had been a shooting. Other professional gaming leagues and teams also began tweeting updates from the event, as well as condolences for their fellow gamers.

An update from the Jacksonville Madden event:

There appears to have been a shooting at the event, and @YoungDrini was grazed in the hand. He is away from the scene and safe.

We can confirm that Joke is SAFE & is in touch w/ his family. We want to extend our thoughts & condolences to the victims, families & those affected by the shooting that occurred at Madden 19 tournament in Jacksonville, FL. More than ever we embrace & support the gaming community

We are deeply saddened to hear of the shooting that took place at a Madden Tournament this afternoon in Jacksonville, Florida.

We want to express our condolences to the victims and extend our support to everyone impacted by this tragic event.

Electronic Arts, the company behind “Madden 19,” tweeted a statement saying: “We are aware of an incident at a sanctioned Madden Championship Series competition in Jacksonville. We are working with authorities to gather facts at this stage.”

As news of the shooting got out, several current and former NFL players also began tweeting condolences and calls for gun violence to end.

Damn, praying for Jacksonville. This nonsense has to stop #prayforjacksonville

I’m speechless. Lifting up the Jacksonville community after today’s tragic event. A gaming tournament, a church, a movie theater, a school — people should feel safe in these places. Prayers to the families, witnesses, and those affected. ????????

Praying for my city of Jacksonville!