News Corp. Chairman-CEO Rupert Murdoch described himself as “maybe a radical” Tuesday night and accused the News York Times of being too close to the Obama administration.

“I have great respect for the Times, except it does have very clearly an agenda,” Murdoch said in an interview at the National Press Club in Washington with Marvin Kalb. “You can see it very clearly in the way they choose their stories, what they put on Page 1 — anything that Mr. Obama wants.” 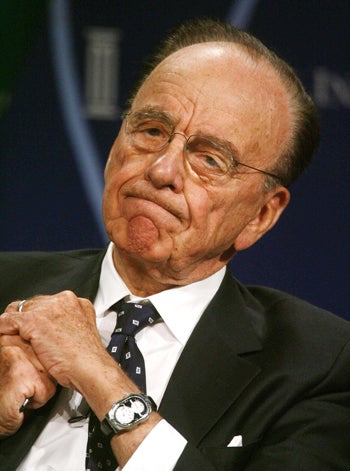 Murdoch, whose Wall Street Journal soon will start to more directly compete with the Times by publishing a sections that covers New York also denied he has a personal tiff with Times publisher Arthur Sulzberger Jr., the bottom of whose face was used to illustrate a recent Journal story on “feminine-looking” men’s appeal to women.

“I never saw it [in advance],” said Murdoch of the illustration. “I never noticed it. I think 99.9 percent of readers didn’t notice it and then someone did and it got written about in blogs. I know who did it. It was done as a joke. He [Sulzberger] should have a life. Come on.”

In the wide-ranging discussion for a program to be broadcast on public television, Murdoch also denied he was a Republican or that his Fox News Channel unfairly presented a conservative viewpoint.

“Is that a bad thing to be Democrats?” asked Kalb.

“No, but we aren’t Republicans,” said Murdoch.

Asked to explain what he was if not a Republican or a conservative, Murdoch replied, “Maybe a radical. Somewhere radical I would say.”

Asked about the use of Sarah Palin on Fox News, Murdoch said she wasn’t a reporter but a commentator.

“I don’t how often Roger [Ailes] uses Sarah Palin, but I know whenever he does the ratings leap,” said Murdoch. “We are not adverse to high ratings.”

He also predicted that even though internet users have grown accustomed to getting news content for free, they would adjust to paying for content.

“I think if they have nowhere else to go, they will pay if it’s reasonable,” he said.

He also reiterated that newspapers have to step up and start getting value for their content.

“We are going to stop people, like Google and Microsoft taking our stories for nothing,” he said. “If you go to Google News, you tap on it and you get the story from the Wall Street Journal and they take it for nothing.”

Suggesting that the keywords have produced “a river of gold” from content of newspapers, he said newspapers ought to stop it and let them “do their own reporting or whatever.”

Murdoch also praised Apple’s new iPad and suggested it and like products could prove a savior to the newspaper industry.

“I got a glimpse of the future last weekend with the Apple iPad,” he said, demonstrating a Wall Street Journal application use on it during the show. “It is a wonderful invention. It may well be the saving of the newspaper industry.”