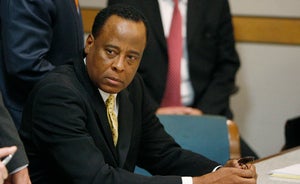 Wednesday had been touted as the day Dr. Conrad Murray would surrender himself to Los Angeles authorities in connection with the 2009 death of Michael Jackson. But by midday it looked as though the doctor will have to leave his downtown suit out for Thursday instead.

“We have no idea what they have in mind,” Murray spokeswoman Miranda Sevcik tells TheWrap. She says neither Murray nor his lawyers, J. Michael Flanagan and Edward Chernoff, have heard news from the District Attorney. “We assume that it’s not going to happen today because the day is slipping away – we’ve been ready for a call since this morning.”

There has been some speculation that the D.A.’s office has not, in fact, been prepared to arrest Murray immediately — and that by very publicly announcing their client is ready to surrender, his lawyers are trying to pressure prosecutors into revealing their plans for Murray.

“Self-surrender” is a method by which suspects named in criminal complaints can avoid the humiliation of being handcuffed at home or work (as well as dodge long weekends spent in jail if unexpected bail problems arise) by turning themselves in. A felony suspect must appear in person.

Bail is typically a statutory amount that appears on the arrest warrant. (The 2010 Los Angeles County Felony Bail Schedule lists involuntary manslaughter – the charge with which Murray has been expected to be arraigned –as requiring a $25,000 bond.)

Murray is staying in Santa Monica, leading to visions of a perp motorcade headed from there to downtown’s Criminal Courts Building – and a media firestorm. That needn’t be so, however.

Technically, Dr. Murray has the option of turning himself in to any county courthouse or Los Angeles Police Dept. station willing to accept him. (The Superior Court in Santa Monica is a civil court and would not qualify.)

With a bondsman accompanying him, Dr. Murray could be released after about an hour, following a booking procedure that would include photographing, fingerprinting and a criminal background check.