Jerry Sharell, a music industry veteran who worked with the Eagles and Jackson Browne, is reportedly in critical condition after being held hostage in Los Angeles and slashed with a machete by his girlfriend’s ex-husband. 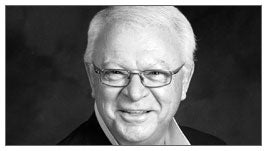 Sharell was cut several times in the neck and head, according to a report by KABC. The local news channel said he is expected to survive his injuries.

In addition to working as a music and entertainment executive for companies like Asylum Records and MCA Video Distribution, Sharell hosts the radio program “Sundays with Sinatra” for Los Angeles radio station KJazz.

Sharell and his girlfriend were held at knife-point on Sunday, until the woman was reportedly able to get away and call the police. The alleged attacker slit his own wrists and is also in critical condition at an area hospital, according to KCBS.

“We were devastated to hear about this attack and we’re wishing him a speedy recovery,” Stephanie Levine, station manager at KJazz, told TheWrap.

A Spokesperson for the Los Angeles Police Department did not immediately respond to requests for comment.