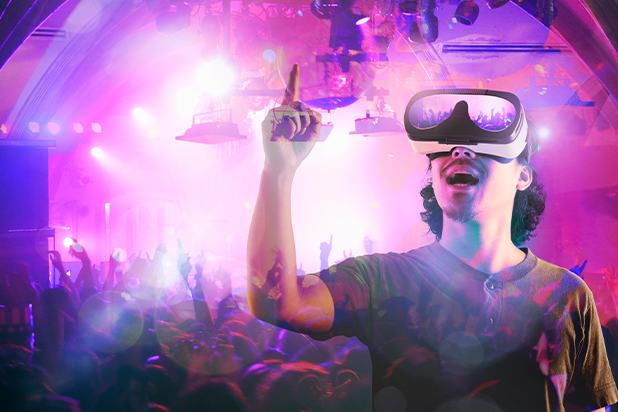 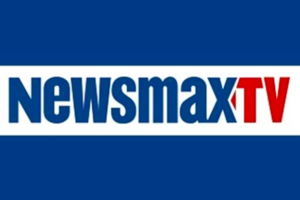 Virtual Concerts Are Set to Reshape the Music Industry Post-Pandemic

”COVID is going to prove over time to be the greatest thing that ever happened to the music industry,“ music technology investor Zach Katz tells TheWrap

Even when fans flock back to live music venues post-pandemic, virtual concerts will remain a key part of the industry and allow musicians to take their shows further on the road, experts said.

Live music is estimated to bring in $26 billion each year, a number PriceWaterhouse Coopers predicted was on track to grow pre-pandemic. In the absence of traditional concerts, music technology companies have found a valuable niche.

“What COVID has done is actually finally pushed the music industry; it’s finally had enough of an earthquake event to push the industry to try and figure out how to diversify its revenue streams, how to build a business for tomorrow,” said Zach Katz, CEO of Raised in Space, a Los Angeles-based venture capital firm that invests in music technology startups. “COVID is going to prove over time to be the greatest thing that ever happened to the music industry.”

A virtual concert is a catch-all term used to define any show that doesn’t have a physical audience. While virtual reality is still developing and far from widespread adoption, VR businesses are experiencing an unexpected bump due to the coronavirus pandemic. Concerts held in virtual reality can also broadcast simultaneously to other devices, so the audience is far greater than a standard concert.

Online platforms broadcasting virtual shows are seeing a spike in viewers thanks to the pandemic: YouTube TV reported a 250% increase in live viewers, and Twitch’s music category has seen the number of people making music content triple between Q2 2019 and this year’s second quarter. While companies readily shared growing attendance figures, they declined to share how much revenue these virtual shows are making. 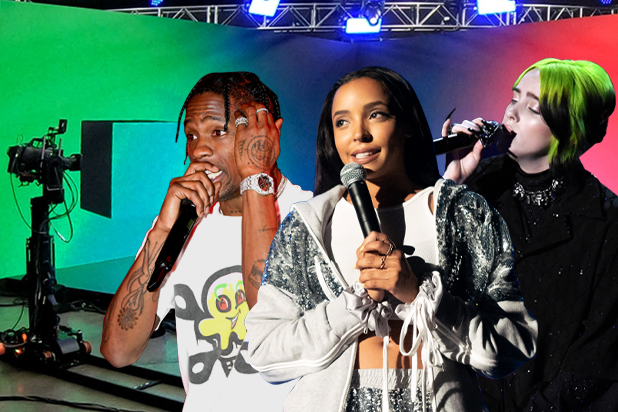 Artists like Billie Eilish are adopting virtual reality concerts as a way to stay in touch with fans. Eilish’s August concert in Madrid was broadcast on Oculus headsets and produced by Supersphere. Recent virtual concerts also include a virtual Doja Cat performance at the VMA’s this summer, put on by XR Studios. Hip-hop superstar Travis Scott is also jumping into mixed- reality shows and hosted a virtual music event inside Epic Games’ “Fortnite” at the beginning of the pandemic that attracted over 12 million viewers.

Rapino said LiveNation has been “dabbling in virtual” for years, streaming shows online for sponsors and on YouTube.

“We think going into the next two years,” he said. “We’ll be streaming a lot more of our concerts to fans that maybe can’t show up at the event.”

Raised in Space began investing two years ago and is backed by music manager Scooter Braun, who has worked with artists including Taylor Swift and Justin Bieber. Its investments include Wave, a Culver City-based mixed reality startup that lets musicians create virtual avatars of themselves to stream concerts live.

Wave’s creations include virtual versions of artists like Tinashe, Imogen Heap, Galantis and violinist Lindsey Sterling, and the company has hosted over 50 virtual concerts so far. 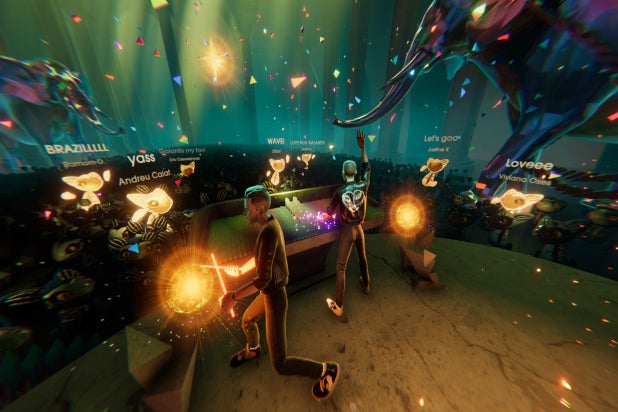 “We think that the future of the music touring experience can live in both a physical and virtual experience, which also reflects how the next generation is consuming entertainment,” a Wave spokesperson told TheWrap. “Wave is not replicating the physical experience of a concert or tour; it is made to be complementary… it also gives the artist an opportunity to monetize and interact with fans in a new way.”

Wave has raised $40 million since its 2016 launch, most recently a $30 million raise in June that valued the company at $90 million, according to funding database PitchBook Data Inc. “Their process in which they execute shows is so dramatically ahead of anyone else,” Raised in Space co-founder and President Shara Senderoff told TheWrap.

As music festivals shifted to virtual streaming formats earlier this year, Twitch has emerged as a key platform to making sure the music doesn’t die.

“In the future we believe that we’ll see more artists and festivals adopt a hybrid approach to performances. We’ll see dedicated virtual shows and festivals that are supplemented by those that are in-person (and vice versa),” Twitch head of music Tracy Chan told TheWrap.

Virtual reality concerts are becoming increasingly popular — and companies like LA-based Supersphere are leading the charge. Supersphere created a software called ArcRunner, which it uses to build virtual stages inside VR, complete with lighting controls. It debuted the technology with a VR concert with electronica artist Steve Aoki Sept. 30 and is working on more experiences. Facebook is a key partner for Supersphere, and it tailors most of its VR content to Facebook’s Oculus headsets, co-founder Lucas Wilson told TheWrap.

“Our goal at Supersphere has always been to bring fans closer to the things they love, and our world needs those connections now more than ever,” Wilson said. 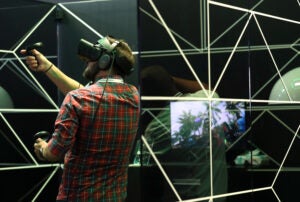 VR technology still needs to mature before it’s widely used in concerts, said Mitch Glazier, CEO of the Recording Industry Association of America, but he thinks there is ample potential for virtual concerts to continue gaining traction among music fans.

“I have watched a concert on VR, and it made me a little sick; the camera was swinging all around,” Glazier said. “To me, it certainly wasn’t like being live, but it does have cool opportunities for the viewer to be in control of the experience. I don’t see it as a replacement (for live music).”

Chan said Twitch’s music category has grown by 550% year-over-year, and the number of broadcasters making music content tripled between Q2 2019 and Q2 2020.

“These incredible music events on Twitch are not only a respite from all that’s going on around us but saving jobs during the pandemic, which is wreaking havoc on the live music industry,” Chan said. “For many artists coming to Twitch, it was their first time on the service.”

YouTube is also increasing its outreach to musicians and using its platform to live stream shows. One recent event, Save Our Stages Festival, was a virtual three-day music festival to raise money for the National Independent Venue Association, which supports small theaters across the country. The concerts took place in actual venues with skeleton crews and are then broadcast to millions.

YouTube struck a deal 10 years ago to live stream the Coachella music festival, and did so virtually this year, along with Lollapalooza.

“We’re getting such a broader and more mixed reach than ever before and since March, there’s been over a 250% increase of live viewers on TV from YouTube; people are really engaged,” YouTube’s head of music Ali Rivera told TheWrap.

Rivera noted that virtual shows democratize the music — fans with disabilities, financial constraints or travel concerns don’t have to miss out, and artists are able to perform in areas they couldn’t normally reach.

Also Read: How Songtradr Became the Amazon of Music Licensing - And Doubled Artists' Earnings Since the Pandemic

“We fully expect to more than double the number of people on the network this year,” Ellin said.

LiveXLive’s subscription service tiers, which range from $3 to $10 monthly, give fans access to on-demand and live concert streaming and original content. Ellin said the company recently found that 43% of its users began tuning into live stream music since the beginning of the pandemic as tours evaporated.

Once live venues are operational again, virtual concert experiences will likely stick around, said Glazier: “There might be opportunities for artists, between tours, or to make a potential great amount of revenue with low cost in addition to their touring.”

Glazier said he doesn’t think virtual shows could ever wipe out the stadium tour.

“The music experience is a communal sharing experience that you just can’t get with a couple friends over watching a live stream,” Glazier said. “I think (artists) probably see it as supplemental, as well, and they’re probably looking for opportunities where they can incorporate the technology.”

Fans might even tune into a virtual event while they’re at the physical one, a sort of hybrid viewing approach several music executives including LiveNation’s Rapino might become the standard way of attending concerts.

“Some (fans) may want to still stream on our app when they’re at the event because there’s some added value of digital back rooms or camera angles,” Rapino said. “We believe that virtual is a great kind of a complement to the core business.”

The demand for concerts, once it is safe to return to venues, is expected to be immense, Glazier said, adding he thinks it could be “like the Roaring ’20s” all over again. For artists who aren’t ready to return to the stage — or fans unable to secure physical tickets — virtual shows will be a crucial part of the evolving live music experience.

“We don’t believe (virtual shows) are going to overtake live. It is always going to be ancillary,” Senderoff said. “If we look toward trends, over the next couple of years, artists are going to be looking for additional creative outlets to attach their brand to. The real question is, how do we grow this emerging business?”