What do you get when you combine the NFL’s most charismatic star and entrepreneurs biting at the bit to become the next business success story?

The answer is reality show “MVP” — and the opportunity for a new company to get a Gronk-sized boost.

Gronk is both the host and a producer on the series and, as he told TheWrap during a recent set visit, “MVP” (which stands for “Most Valuable Partner”) is “where businesses pitch us on why we should endorse them and help them bring their product to the next level to show more people what they’re all about. It’s an opportunity to bring their companies up and expand them out there.”

These are serious words from Gronk — who’s known for being the most hyped, fun-loving player in the league — but he knows how to knuckle down to business when it matters, whether on the field, in the gym or in the boardroom.

And don’t worry, he has a blast on set too. “It’s a lot of fun doing it — being with other athletes, seeing these businesses come in … listening to pitches, ideas and reasons why they want us to join their companies and help them expand,” Gronkowski said.

“It’s also just great seeing other athletes and what they’re all about, helping to guide the way through the stuff off the field,” he added.

“I would love to get Shaq or Charles Barkley … a couple of the older guys who are now TV announcers to come on the show,” Gronkowski said. “They seem like they have great personalities.” What about his star QB, Tom Brady? “Nah, he’d never do it.”

When TheWrap was on set, Gronk and T.O. were going head-to-head in a vicious game of Pictionary along with destroying each at the basketball net throwing free throws … so yeah, it’s not all serious.

Aside from his co-panelists, Gronkowski has been pretty impressed with the businesses that were pitching to them. “There are a lot of cool companies out there that are doing well but just want to expand and get them some buzz,” he said. Standouts for Season 2 were “a margarita machine, like a coffee espresso machine but you can make cocktails in them” (go figure!), the Maximus clothing line for big and tall people (“I definitely need that!”) and a unique skateboard concept.

As every NFL player knows, the career-span of an athlete is unpredictable, and very few players can say they’re still in the league at age 40 like Brady. Gronkowski knows better than anyone that injury can sideline you at a moment’s notice and you always have to plan ahead.

“Sports can bring you so far, but it’s always good to do things off the field and know what’s going on … have an education in the business world and know what’s out there, because sports doesn’t last your entire life,” he said. “A lot of people play for a couple of years and then go out and find what else there is to do. It happened to my family, my brothers and now they are on to new business ventures. It is good to get a business sense, business savvy and then when it comes down to that time, you’re ready to roll.” 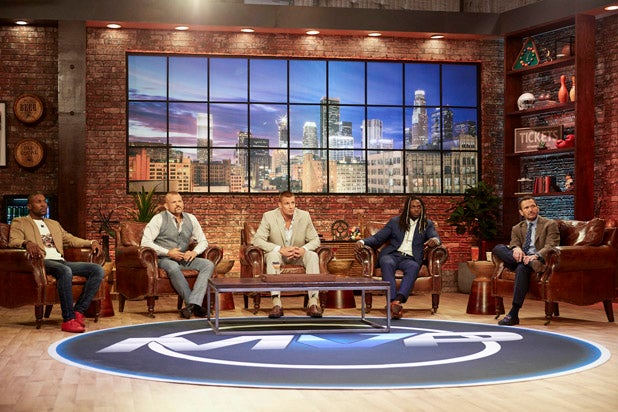 His brothers are poster boys of that philosophy — with Dan and Gordie Gronkowski Jr. running an elite workout company called Gronk Fitness, which now boasts Gronk Zones across gyms in Boston; and Chris Gronkowski’s vacuum-insulated Ice Shaker blowing up the sports bottle industry. “He doesn’t need my help pitching that,” Rob laughed when asked if that should be on the next “MVP.” “He’s doing great on his own!”

While he’s secure in his job at the Patriots with boss Bill Belichick for a long time, Gronkowski said his dream job post-football would be “my family business — fitness equipment. I love working out, I love being active, so just to be able to keep launching new fitness products and new fitness innovations out there,” he said. “To keep grinding like crazy and keep people fit, Gronk Fitness already has my name on it so we’re good to go.” 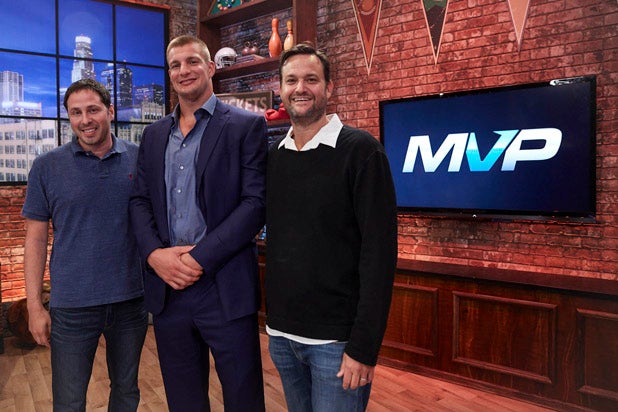 TheWrap also spoke with “MVP’s” creators, Axelrod and Patricof (above), about how the show came about — and how, like any booming business, it plans to expand.

“We’ve all seen these athlete endorsement deals but we never know the inner workings of them,” Axelrod said. “There’s been an explosion of business shows, start up-ism and entrepreneurism, so we wanted to do two things — give these athletes a chance to meet the entrepreneur, and give them a chance to get in front of athletes like Rob, which they would never have the chance to do before. They now have that platform while entertaining the viewers at home — and if they do strike a deal then this is a natural way to kick off that promotion. So everybody wins,” he added.

The pair don’t shy away from comparisons to “Shark Tank,” but stress that “in some ways it’s the complete opposite. The whole idea is ‘how do you match up brand ambassadors with different companies?’ From that stand point it is a very different show,” Patricof said. “We love ‘Shark Tank’ — it is interesting, smart, so we respect the comparisons.”

Axelrod went on to explain that “the startups are really investing in the athletes. They’re the ones putting up the money to get the athletes to work with them. The athletes are lending their brand, and they only have one. Money comes, money goes, but Rob only has one brand and he has to manage it properly.”

As for the A-list star power panels that included Kevin Durant, Antonio Brown and Marshall Faulk last season, “it definitely starts with our partner Gronk; he is one of the biggest names in sports,” Patricof said. “So it gives a level of credibility. It’s an exciting show … then from the quality standpoint, this is a serious production and at the same level as if you were doing ‘Shark Tank’ or a network show. The athletes saw that in year one and we definitely use our relationships and Gronk’s influence and get top people.”

Axelrod went on to explain that the athletes are actually often the target audience for the products being pitched. “For many people, they’re like gods. But this series shows that off the court or field they’re not only very business minded and smart, they’re also just guys,” he said. “So the things they like and are interested in are the things we’re all interested in.”

As for the future of aspirations of the show, “Obviously we want to continue seeing ‘MVP’ go on forever,” Patricof said. “When we started out, the whole concept was that athletes, entertainers, musicians, YouTube stars, chefs are all brands now. So why not take a concept that you can use for those different personalities?”

“We’re also looking into taking a partnership that was paired on the show and following the marketing campaigns that were built out to see how Rob or another panelist interacted with the company,” Axelrod added. “There’s a lot that goes into it from shaking hands on this stage to launching a product together — all that interacting is something the fans are interested in seeing.”