Hollywood is a town built on the power of the image. So allow me to share some of the profound images my Stand Up To Cancer colleagues and I have seen over the past week in St. Louis throughout Major League Baseball’s All-Star Game festivities.

More than 100,000 people gathered under the glorious Arch for an incredible performance by Sheryl Crow and Elvis Costello. At one point many in the crowd stood up to cancer by raising their phones in the air, texting the word “STAND” to donate funds for the fight against cancer. That was just Saturday. 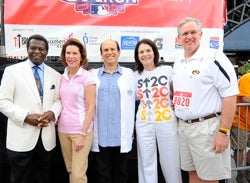 On Sunday, there was the moving image of eight thousand runners in t-shirts advocating for the end of all types of cancers. I had the privilege of standing alongside Michael Milken, founder of the Prostate Cancer Foundation, and Ambassador Nancy Brinker, the founder of Susan G. Komen for the Cure, at the first-ever All-Star Charity 5K & Fun Run.

I was there representing Stand Up To Cancer (SU2C), a nationwide movement raising funds for "Dream Teams" of scientists from different institutions and disciplines working together on innovative research aimed at bringing new treatments to patients in an accelerated timeframe.

MLB is sharing the race proceeds equally among these three groups.

On Monday, MasterCard’s “Hit It Here” signs were sprawled out in home run territory at Busch Stadium, giving players the chance to raise a million dollars for cancer research with one swing of the bat. Tuesday night saw Richard and Diane Nares, who channeled the grief of losing their five-year old son Emilio into an organization that assists families with children battling cancer.

They, and other "ordinary" Americans who are doing extraordinary things, were honored at the game as "All-Stars Among Us." Watching Derek Jeter, Albert Pujols and their other National and America League All Star teammates envelop this group to thank and congratulate them was an unforgettable image.

Major League Baseball and Commissioner Bud Selig are to be congratulated for taking their commitment to battling cancer to an entirely new level. By engaging fans, the baseball community is getting the word out in a huge way that each and every one of us has a role to play in ending cancer.

That can help change the game for those whose lives are affected by this terrible disease — and with one of every two men and one of every three women in this country being diagnosed at some point in their lifetimes, cancer touches us all.

Every day we employ our powerful platforms to drive ratings, box-office numbers and media buzz, but it is when we use these mediums to connect audiences to social change that we have the opportunity to make our biggest impact.

All of us at Stand Up to Cancer are extraordinarily grateful to this industry and the hundreds of stars who have supported our efforts and the philosophy that working together, we can end cancer.

We have seen remarkable support, especially around last September’s historic broadcast, which helped raise more than $100 million for innovative research. This is just the beginning. Our industry must keep doing what we can: not just donating time and money, but putting cancer in film and TV storylines and keeping the issue front and center in the news media.

We must continue to fight and fight hard. Kim Lee, a vivacious 35-year old woman I met at The Alvin J. Siteman Cancer Center at Barnes-Jewish Hospital and Washington University School of Medicine, provided the most moving image of our trip to St. Louis.

Her cheerful disposition belies the fact that she has endured a bone marrow transplant and other difficult treatments for acute lymphoblastic leukemia during the last year.

We must do what we can to stand with Kim so we can all have the image of knowing of where we were when cancer was no more.