Lindell and his voter-fraud-pushing film “Absolute Proof” beat out a field that included “Dolittle” with Robert Downey Jr., “Fantasy Island” and Sia’s “Music” for the title of the worst movie of the year at this year’s Golden Raspberry Awards (aka the Razzies).

Lindell also won the title of Worst Actor for portraying himself in his conspiratorial film that pushed false and debunked claims that the 2020 election was rigged and flipped against Donald Trump. The Razzies voting body in a release called “Absolute Proof” a “faux documentary” and a “two-hour, fake news snooze-fest.”

Lindell wasn’t the only GOP figure who got dinged for some of the worst movie moments of the year. Rudy Giuliani won Worst Supporting Actor for appearing as himself in “Borat Subsequent Moviefilm,” where he famously got caught with his hand down his pants following an interview with Borat’s daughter. He beat out a field that included Chevy Chase, Shia LaBeouf, Arnold Schwarzenegger and Bruce Willis. 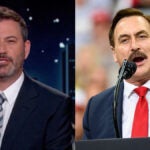 Sia’s “Music” may have been nominated for a pair of Golden Globes, but it also led all films by winning three Razzies, including for Worst Actress Kate Hudson, Worst Supporting Actress Maddie Ziegler and Sia herself for Worst Director. Her film was criticized for casting the able-bodied Ziegler as a non-verbal autistic person, among other concerns. And the backlash led Sia to apologize and add a warning label to the front of the film about scenes that depict physical restraint.

The Razzies, now in its 41st year, are voted on online from a group of 1,097 members, and they award winners the $4.97 trophy with a Golden Raspberry on top. In the past, some winners have been good sports and accepted their prizes, such as Sandra Bullock accepting her Razzie for “All About Steve” the same year she would win her Oscar for “The Blind Side.”

This year, Glenn Close was actually nominated for a Razzie for Worst Supporting Actress from “Hillbilly Elegy” even as she’s nominated for an Oscar for the same performance.

The full list of nominees and winners is below. Check out a video ceremony announcing the 2021 Razzies here.