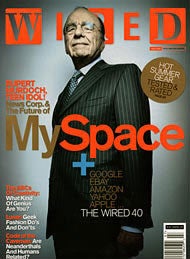 On Tuesday, Business Insider reported what has been speculated for awhile now: that News Corp. and its chief, Rupert Murdoch, are dangling MySpace, the once-mighty social network that has fallen out of favor – and pop culture – since Rupe bought the then-popular site for $580 million in 2005.

The report cited a “gossiper close to News Corp. management” who claims the company is peddling MySpace to private equity firms with an asking price of – get this — $700 million. Tech Crunch followed with a report that an investment bank, Code Advisors, is working on a possible spin-off, despite the bank’s denial. (I spoke with one private equity source, who sees just about every large media deal come across his desk, but he hadn’t seen a book on MySpace.)

On Wednesday, News Corp. issued this terse statement: “News Corp is committed to MySpace and is not seeking a buyer.”

Committed, sure. But that doesn’t mean it’s not untouchable. Far from it – especially at that ridiculous price.

But just who would buy MySpace now? The usual players with the kind of cash Murdoch is looking for – Google, Yahoo, even Facebook – wouldn’t appear to be interested in a faltering property.

A month ago, Murdoch sounded committed, if tentatively, to MySpace. During a conference call with investors, he said the unit began "to see signs of traffic stabilization" during its most recent quarter under MySpace’s new management team. (The contribution of News Corp.’s digital media group – which is more or less all MySpace — fell $32 million during the period  “due to lower search and advertising revenue."