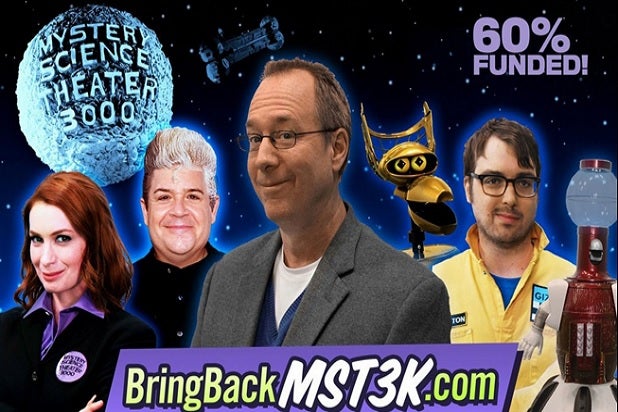 A Kickstarter-funded reboot of “Mystery Science Theater 3000” is more than halfway to its funding goal — and creator Joel Hodgson hopes that a new cast will help introduce the ’90s cable phenomenon to a new generation.

“The theory is to refresh it for a new audience but still invite the original people to come back creatively and do cameos,” Hodgson told TheWrap.

Most recently, Patton Oswalt joined the project to write and play TV’s Son of TV’s Frank, the offspring of the character from the original show played by Frank Conniff. Other new cast members include Felicia Day, Hampton Yount, Baron Vaughn, and Jonah Ray.

By Tuesday afternoon the campaign to relaunch the show had raised over $3.4 million out of a planned $5.5 million, meaning at least six new episodes will be produced. And while the campaign goal may seem high, Hodgson insists that the show thrives on its thrifty nature.

“This show feeds on a public domain movie. It feeds on movies that don’t have any cost,” Hodgson said. “And it’s really simple from a production standpoint because all you need is a green screen and a really simple set.”

Indeed, the show was famous for both its hilarious riffs on B movies and its cheaply made sets. No doubt the low cost of production is what helped the show run from 1989-1999 with 197 episodes across three different networks.

Hodgson also spoke about what originally inspired him to make the show, which can be traced back to Elton John. Hodgson said that an illustration for the song “I’ve Seen That Movie Too” helped launch the cult phenomenon.

“They had a man and a woman in theater seats at the bottom of the picture and they were watching a Clark Gable movie or something,” he said. “And I remember looking at it and saying, ‘That would be an awesome idea for a TV show. You could use a green screen and have these people sit in silhouette and talk during the movie.'”