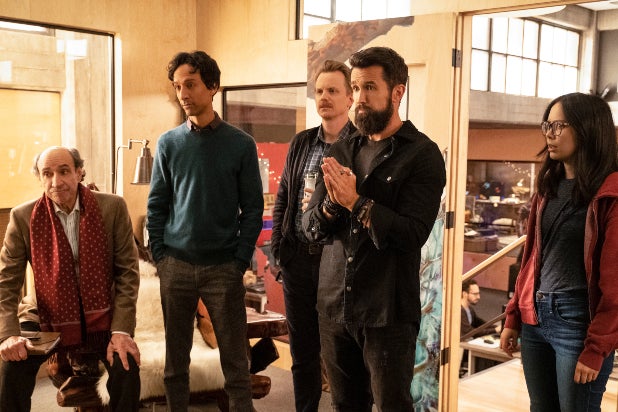 Fewer productions had more challenges during the pandemic than Apple TV+’s “Mythic Quest,” which had to completely shut down filming for multiple weeks in December after an outbreak of COVID-19 on the set.

On Friday, the show’s star and co-creator Rob McElhenney explained how the outbreak happened, and in the process detailed just how difficult it is to film amid a contagious pandemic, particularly during the height (so far) of the U.S. outbreak.

“We knew that nothing is 100% safe,” McElhenney said Friday during a virtual TCA panel for the Apple TV+ series’ upcoming second season. “Unfortunately, certain things maybe are just uncontrollable, especially if you’re finding that you can’t police everybody all the time. And to be fair to even those people who weren’t necessarily following all of the guidelines all the way through, as we all know, it becomes difficult. It becomes difficult because we are social animals, and we have a way that we’re used to working, and that people fall back into those ways, regardless of how many times they’re reminded.”

McElhenney said that they made it through an eight-week period without any on-set transmission (only one or two positive cases). But then he said they had “one, possibly two events” that led to an outbreak among the crew. At least one of them, he said, happened “during the construction of one of the sets while we were out.” Unfortunately, they couldn’t really contact trace to find out exactly what had caused the outbreak.

“But we did everything we can we could, based on the information that we had, and immediately shut down for two to three weeks, before we felt like it was safe to come back again,” he said. “Luckily, every single person that wound up positive over the course of the entire run, whether it was contracting at home, or bringing it into work or actually contracting at work, made a full recovery.”