David K. Rehr is out as president-CEO of the National Association of Broadcasters. And while some are saying privately that it’s a case of the wrong person hired for the job, others say it’s the job itself that has gotten impossible as the interests of individual broadcasters increasingly diverge. 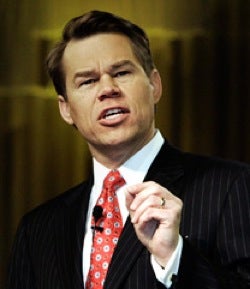 Rehr, former CEO of the National Association of Beer Wholesalers, was hired three years ago by the NAB to replace longtime CEO Eddie Fritts.

The three years has been a trying time for the NAB. In the face of major technical and economic changes — from the growth of a web as a potential rival, to the arrival of DTV, to the economy — broadcasters have faced increasing regulatory challenges.

Worse, the traditional solidarity of the NAB as representative of all broadcasters on all broadcast issues has lessened as some big TV station owners sold off their radio stations and debates erupted on whether to put the group’s resources toward fights in radio or fights in TV.

Complicating the fight, broadcasters said Rehr had few wins. “He hit no home runs,” said an executive of one broadcaster, who didn’t want to be identified.

“He hit no singles,” said another, who also declined to be identified.

In the last three years, broadcasters’ hopes to get more freedom from Federal Communications Commission media ownership limits have foundered in the face of public opposition and a court decision. Meanwhile, broadcasters have been unable to get either Congress or the FCC to order cable systems to carry secondary digital channels; unable to get the FCC or Congress to pull back on indecency; and some broadcasters are upset the NAB spent so much time and effort unsuccessfully opposing an XM-Sirius merger.

Broadcasting industry insiders say that Rehr, a Republican, is likely to be replaced by a Democrat and that the NAB may be looking to fend off some concerns about diversity at the FCC and in Congress by eyeing a minority candidate.

In a statement, Rehr cited the NAB’s efforts to educate the country about the digital television transition and the ad campaign supporting radio.

"I am looking forward to building on these experiences and working with the broader Washington community to further advocacy efforts through marketing, communications and education," he said.

Rehr said he plans to continue in his current role during a transition phase. During an interim period, Janet McGregor, NAB’s chief operating and financial officer, will work closely with Rehr and assume day-to-day duties until a successor is named.