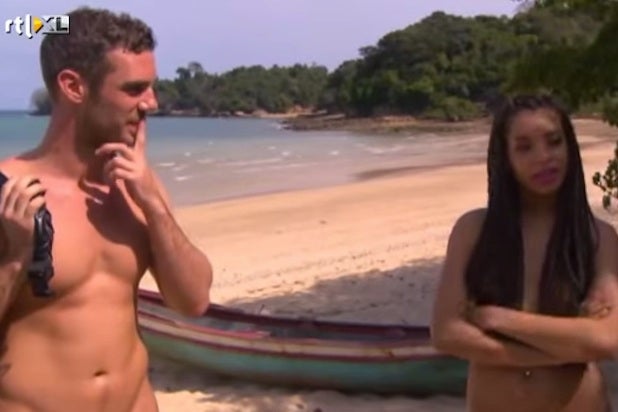 Nudity is the twist that’s adding new life to reality formats this pitching season, especially when it comes to dating series.

Most of the pitches seem to focus on a similar premise: In an exotic location, a man and a woman — both unclothed — size each other up and consider dating.

See video: Discovery’s ‘Naked and Afraid': Duo Sizes Each Other Up for the First Time — in the Nude (Exclusive)

VH1 was the first to have the cojones to greenlight a naked dating show here in the U.S. “‘Dating Naked’ was a pitch that I bought basically on my first day in the office,” VH1’s executive vice president of original programming and production, Susan Levison, told TheWrap.

VH1 will blur out the frontal nudity, though not the rear-end stuff. “Naked and Afraid” uses the same delicate judgment over private parts.

At the time, Levison said that it was the first naked series pitch that she had heard. But that has changed since she ordered it.

“Yes, I’ve definitely seen a trend of naked-themed shows,” Levison said. “That’s why we were so keen on piloting ours quickly and getting it onto the air. We felt that we’re really on to something here, and you obviously always want to be the first one in. I think we are going to be able to achieve that.”

Discovery’s sister network TLC had success with the “Buying Naked,” which had a limited run in late 2013 with a return slated for June. The show goes inside a nudist community in Florida through the lens of the premiere realtor who caters to nudists.

TLC executives have told TheWrap that the network has indeed been receiving other pitches in this genre, including a nude matchmaker show, and others also looking to explore nudist communities.

According to a Fox network executive who declined to be identified, Fox is also considering a naked dating show; this one is not in an exotic location and contestants stand naked and choose each other to go on dates. It has not been greenlit.

Dating shows are only the next wave of dusty reality formats, which will be rejuvenated by showing some skin. Discovery’s survivor show, “Naked and Afraid” — which teams a man and a woman together in a survival test spent entirely in the buff — has become a ratings hit for the cable channel.

Holland earlier this year began airing a naked dating series called “Adam zkt Eva” — Dutch for “Adam looking for Eve.” Like VH1’s upcoming series, the Dutch show places naked contenders in an exotic locale and hopes that by stripping them of all the pretense of clothing they’ll be able to bond on a different level.

“[The nudity] was really a storytelling device that was about something — the search for true love and what happens when you throw away your inhibitions,” Levison said. “And [producers Lighthearted Entertainment] really delivered that on the pilot. So I loved the fact that it was a big hook and it was noisy but also that there was something real and authentic driving it and really well pulled.”

“Adam zkt Eva” is pretty liberal about showing its contenders (no longer) private parts – it shows full nudity. But hey, they’re European.  But even the VH1 show “doesn’t leave much to the imagination,” said one person with knowledge of the project.

As both broadcast and cable networks consider the pitches coming their way, Levison said that cable has an advantage when it comes to pushing the boundaries of risqué show concepts.

“I think any show on cable can,” she said. “Just by virtue of the different standards that we are held to in terms of broadcast standards. Whether it’s ‘Mob Wives’ or ‘Love & Hip Hop’ or ‘Couples Therapy,’ we can do shows differently than you can on broadcast. That’s why I think cable is having such an amazing heyday right now.”