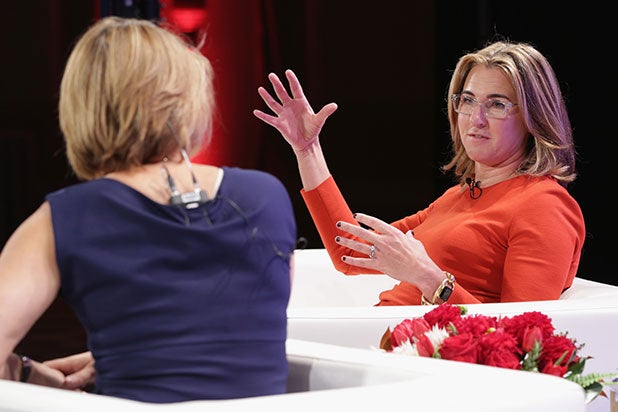 A&E Networks President Nancy Dubuc is no longer pursuing the open seat for president of Amazon Studios , an individual with knowledge of the talks told TheWrap.

The studio is searching for a replacement for Roy Price from the TV side while Amazon looks to expand their “triple A programming,” according to one industry insider with knowledge of their strategy. Amazon CEO Jeff Bezos has made clear that he wants the streaming service to grow a mega franchise on the order  “Game of Thrones” to compete with other platforms. In order to grow their TV side, the studio is leaning away from candidates from the movie world and toward an experienced TV veteran.

Dubuc is now expected to re-up as president and CEO of A&E, a position she has held since 2013. During her time there, she has overseen the cable networks History, A&E and Lifetime and  was listed on Fortune’s list of 50 Most Powerful Women in Business.  Before A&E, she worked at The Christian Science Monitor and the Boston television station WGBG-TV, and then moved on to the History Channel where she became the director of historical programming.

Other contenders include  NBC’s Jennifer Salke and former HBO Entertainment President Sue Naegle, according to the insider.

The streaming giant has been looking for a female to fill the vacant job of Amazon chief since Price’s exit, a move widely reported to remedy its internal sexual harassment problem and an attempt at gender parity in their upper ranks. Paramount TV President Amy Powell was an early candidate last fall, though a spokesperson for the executive told TheWrap last fall the reports were not true. Fox chairman Dana Walden was also an early candidate for the job, but she has since bowed out.

A spokesperson for Amazon Studios has not yet responded to TheWrap’s request for comment.