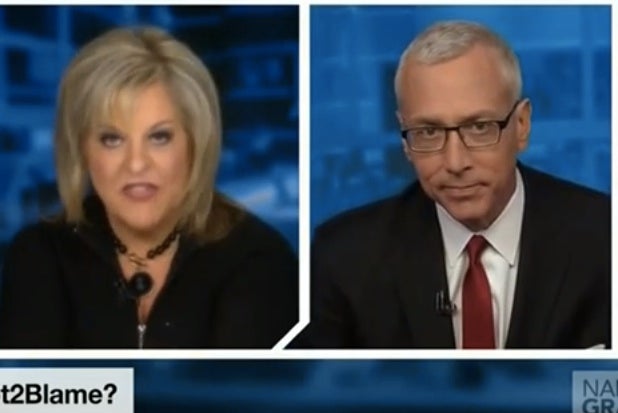 “Dr. Drew, I really appreciate ‘Dr. Drew on Call’ — I do, I’m a big fan — but you’re in our house now,” Grace began as she disagreed with Pinsky over pot being the reason a man gunned down and killed his wife. “You can’t just throw out a fact unless you have evidence.”

Also Read: Nancy Grace Battles Rapper 2 Chainz Over Pot: ‘As Rich As You Are — I Got a Problem’ (Video)

Drew argued that empty pill bottles were found in the perpetrator’s room and he could’ve been coming down from withdrawal from a drug other than marijuana.

“There’s nothing in this father’s bloodstream that indicates pot-related substances,” Grace said.

“Nancy, that’s very much my point … that makes my case!” Drew shot back, suggesting the man was probably suffering from non-pot related drug withdrawal since other drugs were not found in his system.

Grace countered that she doesn’t understand how Pinsky could use his megaphone to suggest recreational marijuana isn’t a culprit in many violent crimes.

“I’m not a legislator,” Drew said. “I’m advocating the people should have what they want.”

Watch Grace and Drew battle below.