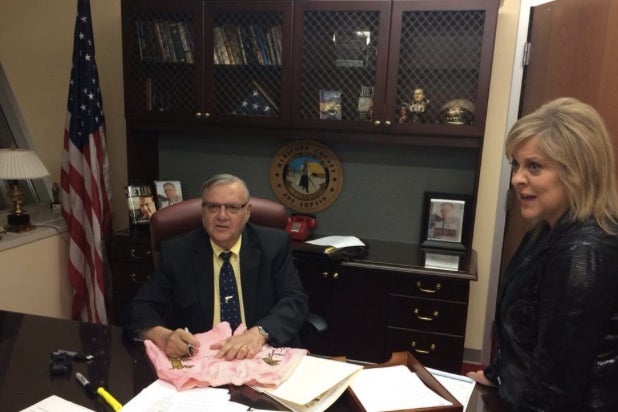 Arizona Sheriff Joe Arpaio is certainly not loved by many Americans, but he seems to have a way with the ladies of TV news.

While HLN anchor Nancy Grace was visiting Arpaio on Tuesday, the controversial Sheriff gave her an intimate gift.

Got a visit from Nancy Grace who is covering the Arias trial and gave her some underwear pic.twitter.com/MD8OXM9IVG

“I of course, am honored to receive another pair of the highly sought-after underwear, bestowed upon me by the legendary sheriff Joe Arpaio!” Grace told TheWrap. “And autographed by the sheriff himself!”

Why the underwear? Years ago, Sheriff Joe learned inmates were stealing white boxers — so he dyed them for better “inventory control,” according to his bio on the Maricopa County (Ariz.) website.