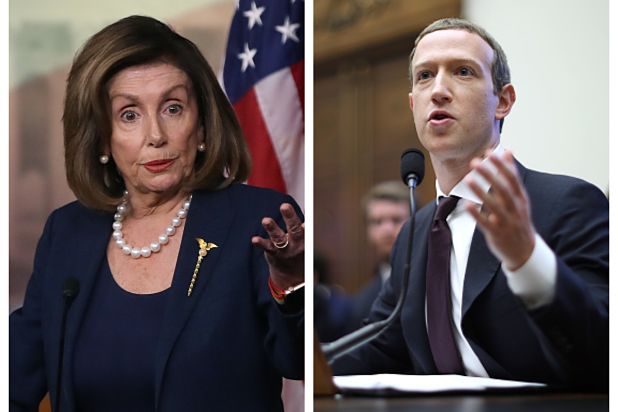 House Speaker Nancy Pelosi ripped into Facebook and its chief executive Mark Zuckerberg during a Thursday press conference, saying the tech giant is “shameful” and that it has looked to “schmooze” the Trump administration in order to get tax breaks.

Pelosi was responding to a question on whether Zuckerberg and other tech executives have “too much power.” Her sharp criticism adds to a growing number of Democratic politicians who have skewered the company in recent months for its decision to not fact-check its political ads. It also comes a week after President Trump said Zuckerberg had recently complimented him for being “number 1 on Facebook.”

“All they want are their tax cuts and no anti-trust action against them,” Pelosi continued. “They schmooze this administration in that regard.”

Pelosi, who represents San Francisco, which is about 30 miles north of Facebook’s Menlo Park, Calif. headquarters, also skewered Facebook for not checking “on the money from Russia in the last election.”

The impact of bogus ads stemming from Russian troll farms has been a heated topic since the 2016 U.S. election, but there is little reason to believe it played a major role in shaping the result; a study from Oxford University found Kremlin-backed trolls spent less than $75,000 on Facebook ads between 2015 and 2017. Facebook has since made several changes to its ad accounting, introducing an ad library that publicly shares details on how much political advertisers are spending. It also now requires all U.S. political advertisers to register with a U.S. address.

You can watch a clip of Pelosi’s response below:

Pelosi criticizes Facebook, which has an office in her district: "All they want are their tax cuts and no antitrust action against them and they schmooze this administration in that regard…They intend to be accomplices for misleading the American people" https://t.co/7DMcsOnniz pic.twitter.com/P6dI9a1LEl