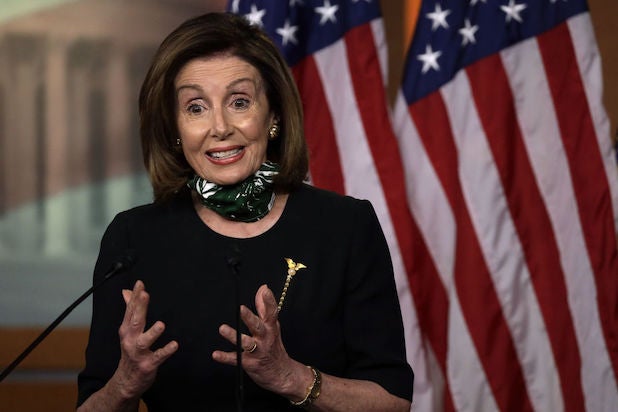 House Speaker Nancy Pelosi said it’s “not a good idea” for a “morbidly obese” President Donald Trump to be taking the anti-malarial drug hydroxychloroquine as a preventative treatment for COVID-19 — especially given his age and weight group.

“He’s our president and I would rather he not be taking something that has not been approved by the scientists, especially in his age group and in his, shall we say, weight group — morbidly obese, they say,” Pelosi told CNN’s Anderson Cooper on Monday evening. “I think it’s not a good idea.”

Earlier on Monday, Trump revealed he began taking the drug — which hasn’t been proven to treat or prevent COVID-19 — about 10 days ago, which is around the time when two White House staffers tested positive for the virus.

“I think it’s good. I’ve heard a lot of good stories. And if it’s not good, I’ll tell you right. I’m not going to get hurt by it,” Trump said.

His comments quickly drew concern from other politicians and reporters, including Fox News’ Neil Cavuto.

“If you are in a risky population here and you are taking this as a preventative treatment to ward off the virus — or, in a worst-case scenario, you are dealing with the virus and you are in this vulnerable population — it will kill you. I cannot stress enough: This will kill you,” Cavuto told his viewers. “The fact of the matter is, though, when the president said, ‘What have you got to lose,’ in a number of studies, those certainly vulnerable in the population have one thing to lose: their lives.”

As for Trump’s weight, the president’s BMI was 30.4 last year, according to the White House physician, placing Trump in the “obese” category. It’s not immediately clear whether his BMI has changed since then and increased into the Class III, or “morbid,” obesity level.

“I would rather he not be taking something that has not been approved by the scientists, especially in his age group, and in his, shall we say, weight group: ‘Morbidly obese,’ they say,” says House Speaker Nancy Pelosi on Pres. Trump’s revelation he is taking hydroxychloroquine. pic.twitter.com/0ImjpEjg9q