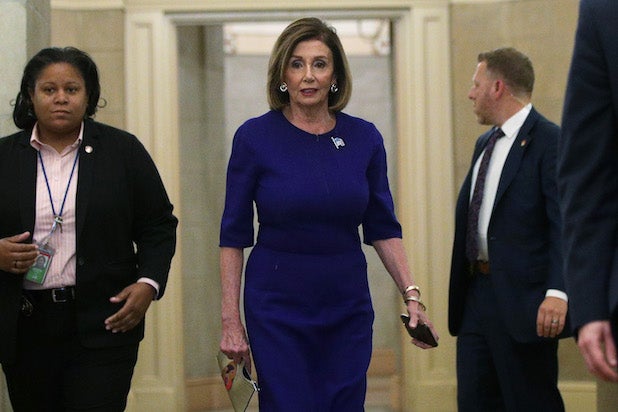 House Speaker Nancy Pelosi addressed a viral run-in with a Sinclair reporter earlier in the day at a Thursday night town hall, asking if the company is even a “news source.”

“Was that a reporter? Is that what reporters do?” she asked during the CNN event.

During her weekly press conference earlier Thursday, Pelosi announced the House would be moving forward on drafting articles of impeachment against President Trump. A Sinclair journalist, James Rosen, asked her if she hated Trump, which she said was “really disgusting.” She warned that reporter not to “mess” with her.

Town hall moderator Jake Tapper told the California Democrat that Rosen was a reporter for Sinclair, and she asked, “Is that a news source?”

After the town hall, a Sinclair spokesperson gave this statement to CNN: “We have reviewed the incident and based on the video, this was clearly not meant to be an inflammatory question and, further, this gave Speaker Pelosi the opportunity to clarify her own views, something that only strengthens positive dialogue.”

In her announcement that the House is moving forward on impeachment, Pelosi said, “Our democracy is what is at stake. The president leaves us no choice but to act, because he is trying to corrupt, once again, the election for his own benefit.”

“The facts are uncontested: The president abused his power for his own political benefit,” she said. The House Intelligence Committee and Judiciary Committee have heard testimony for weeks as the probe into Trump has continued.

“Was that a reporter? Was that what reporters do?”

House Speaker Nancy Pelosi casts shade on a member of the media whose question about hating Pres. Trump elicited a strong response from her this morning. #PelosiTownHall https://t.co/o0WqBlGMWa pic.twitter.com/pgaEJMHAtJ