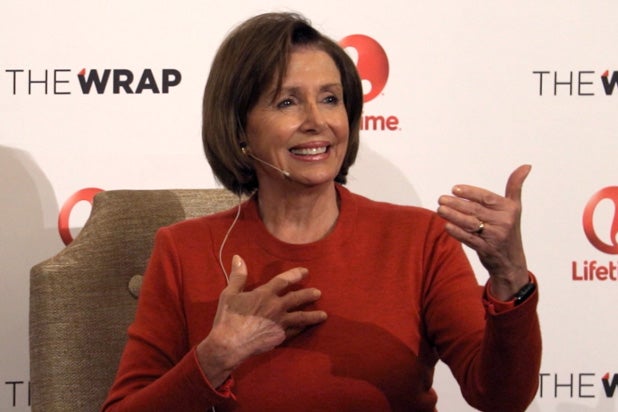 House Minority Leader Nancy Pelosi had one of her own “she persisted” moments during a White House dinner on Wednesday night, according to The Washington Post.

The dinner covered the Deferred Action for Childhood Arrivals (DACA) program. And of the 11 people at the table, Pelosi was the only woman, and had to tell the men there not to talk over her.

When Commerce Secretary Wilbur Ross asked what Donald Trump got out of the deal, according to The Post’s report, Pelosi was ready with her answer, but the men began talking over her and one another before she could make her point: “that the president gets the cooperation of the Democrats, which he will likely need on a host of issues.”

“Do the women get to talk around here?” Pelosi asked the room, according to two people familiar with the conversation, The Post reported.

To this, there was silence, and Pelosi wasn’t interrupted again during the meeting.

"Do the women get to talk around here?" Nancy Pelosi asked at one point, during Wednesday's White House dinner. https://t.co/eoecAZWn7P pic.twitter.com/X1unkvVao5

Pelosi and Senate Minority Leader Chuck Schumer were invited to the White House Wednesday to discuss a range of topics, most notably the DACA program. After the dinner meeting, the two democratic leaders released a joint statement saying a deal on DACA and border security–excluding a border wall with Mexico–would be reached.

On Thursday, Trump clarified that the deal had not yet been reached. Nonetheless, a deal does seem imminent, as Pelosi and Schumer released a second statement saying there is a “mutual goal of finalizing all details as soon as possible.” What remains to be negotiated are the “the details of border security.”

“The wall will come later,” Trump told reporters Thursday morning, reported CNN. He repeated that the wall is currently under construction. “We’re doing a lot of renovations we’re building four different samples of the wall to see which one we’re going to choose. The wall is going to be built — it will be funded a little bit later.”

A statement from a White House official also spoke positively of the deal. “The administration looks forward to continuing these conversations with leadership on both sides of the aisle,” it said.

If the deal goes through, this will be the second time in recent weeks that Trump has reached across the aisle to work with Pelosi and Schumer. Earlier this month, the president worked with the democratic leaders to raise the debt ceiling and extend government funding, particularly for a Hurricane Harvey relief package.

Pelosi’s moment at the dinner reminded some of the moment Senator Elizabeth Warren was asked to stop speaking on the Senate floor in February. She was speaking out against the nomination of Jeff Sessions to Atorney General, and read from a letter by Coretta Scott King to make her point. Senate Majority Leader Mitch McConnell thought she was running afoul of Rule XIX, which bans demeaning another senator, and asked her to stop speaking.