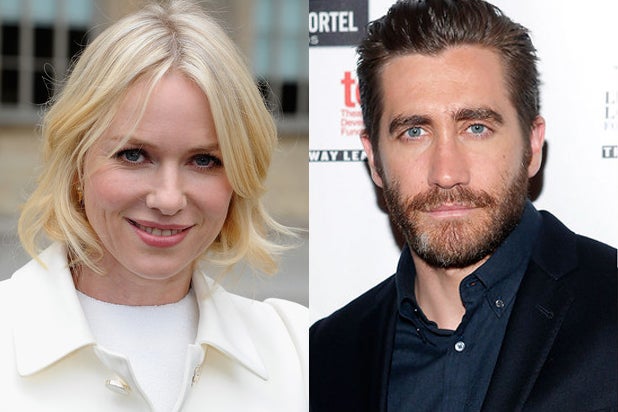 Two-time Oscar nominee Naomi Watts is in negotiations to star opposite Jake Gyllenhaal in “Demolition,” which is slated to be the next film from “Dallas Buyers Club” director Jean-Marc Vallee, an individual familiar with the project has told TheWrap.

Black Label Media is financing and producing the movie with Mr. Mudd, whose Lianne Halfon, John Malkovich and Russ Smith will produce with Black Label’s Molly Smith, Thad Luckinbill and Trent Luckinbill. Right of Way’s Jason Reitman and Helen Estabrook will executive produce with Nathan Ross, who is Vallee’s producing partner and manager.

Based on the 2007 Black List script by Bryan Sipe, “Demolition” follows a young investment banker (Gyllenhaal) struggling to understand his emotional disconnect following the tragic death of his wife in an auto accident. As he tears apart his life in a distraught effort to see where he went wrong, he becomes obsessed with destruction and develops a unique relationship with a single mother (Watts) who rescues him.

Should a deal close, Watts would play a pot-smoking customer service representative for the company behind a vending machine that eats the protagonist’s money. Though she’s dating her own boss, she begins to fall for Gyllenhaal’s character as she learns of his pain and loss.

Vallee has previously described “Demolition” as “a powerful and touching story, written with a strong and sincere desire to try to understand the human psyche, what makes us so unique, so special, what makes us love. This is a script of a rare quality, of a beautiful humanity.”

Black Label boarded the project in October 2013, while Gyllenhaal’s involvement was first revealed back in June.

A dozen years after “The Ring” made Watts a movie star, the Australian actress is as in-demand as ever. Watts is currently filming the “Divergent” sequel “Insurgent” with Shailene Woodley, and she’s slated to reprise her role as Evelyn, leader of the Factionless, in both “Allegiant” movies. She’s also attached to play Matthew McConaughey’s wife in Gus Van Sant’s drama “Sea of Trees.”

Watts has two Oscar nominations under her belt for “The Impossible” and Alejandro Gonzalez Inarritu’s “21 Grams,” and she’ll soon be busy promoting a trio of awards season movies — she co-stars in Inarritu’s festival-bound showbiz comedy “Birdman”; plays a stripper alongside Bill Murray in “St. Vincent”; and stars opposite Ben Stiller in Noah Baumbach’s “While We’re Young.”

Watts is represented by CAA and Untitled Entertainment.