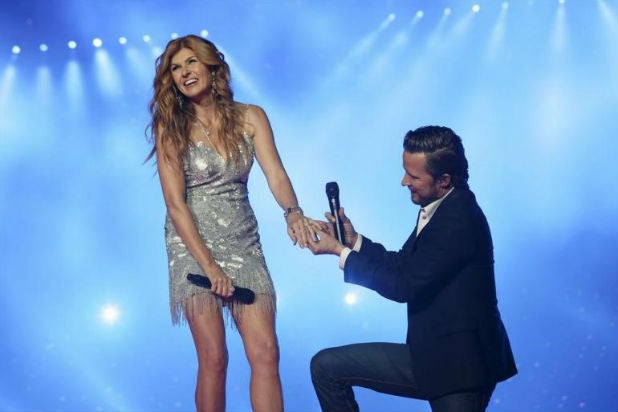 “Nashville” came to CMT in the most Hollywood way possible — though from 2,000 miles away.

The deal for an eventual 22-episode order was negotiated by network counsel Seth Levin, Viacom Kids and Family COO Sarah Levy, and CMT President Brian Philips while partying at a Bell Tower-based CMT Awards after-party in Nashville at 11 o’clock at night.

Sober or not (we didn’t ask), it was an opportunity that Philips and co. were well-prepared for — and exactly the one the network needed.

“Every year, someone would muse about it becoming available and we’d watch and — finally it came our way,” Philips told TheWrap during a Thursday telephone interview. “It was in the open market, and we acted quickly and decisively to bring it in.”

“Everyone we’ve spoken with is onboard,” Philips said of the former ABC series’ cast regulars. “I think we’re good.”

Beyond satisfying the “thousands” of people who Philips says petitioned CMT to save “Nashville,” the acquisition allows the music video-based, reality heavy, and recent documentary adopter to officially kickoff its big move towards scripted programming next year.

(Some non-“Nashville” boasts: The recent CMT Music Awards drew the most viewers for an awards show in network history, and Cyrus’ “Still the King” just enjoyed the channel’s highest-rated original premiere ever.)

Plus there’s the “cache” angle — remember, this is Hollywood.

“Suddenly we’re talking with people who might not have returned phone calls, or necessarily had CMT in their mindset as targets for programming a couple of years ago,” Philips explained.

Beyond Tennessee and Los Angeles, fans from coast-to-coast are just grateful that Juliette (Hayden Panettiere) and Rayna (Connie Britton) have a home — should the “Friday Night Lights” alum officially come back, that is. Either way, the show is, and that ought to make a few million people quite pleased.

“I have looked into the eyes of the ‘Nashville’ nation, and they are really counting on that show coming back and being great,” Philips concluded. “And they’re counting on CMT to do it.”