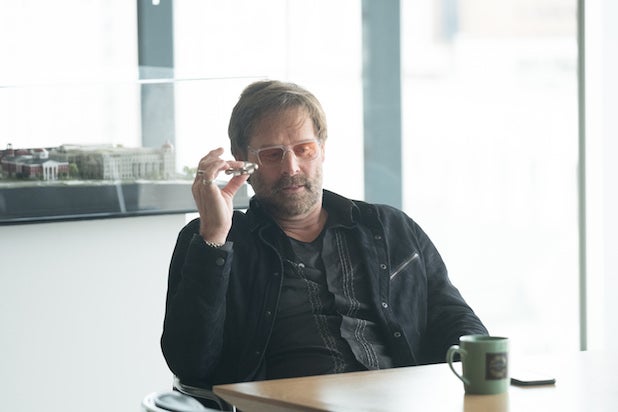 Warning: There are spoilers ahead for the series finale of “Nashville.”

The storyline with Alannah (Rainee Blake) and Brad Maitland (Jeffrey Nordling) in the final season of “Nashville” is one showmakers could have told at any point in the series, creator Callie Khouri told TheWrap in a recent interview ahead of Thursday’s series finale.

The plotline is very similar to the stories told by Harvey Weinstein accusers: Brad, who runs Shiny New Records, signs Alannah and then expects her to do him “favors” in return for things like booking her as the opening act for The Lumineers. When Alannah clarifies that she’s not romantically or sexually interested in Brad, her opening act mysteriously falls through.

“That’s not a new story in music, just at all,” Khouri said. “That’s a story we could have told at any point during the season, but wasn’t exactly a direct response to [the Weinstein stories]. We could have done that any time.”

Khouri added that she and show scribes were writing the storyline with Brad and Alannah “concurrently” with the Weinstein story as it unfolded, but “it wasn’t like ‘oh my god all of this stuff is happening right now, we have to do a storyline about it.'”

Khouri said that like Hollywood, in the music industry — no matter the genre — there’s often an implicit expectation that women are there to please the men.

“It had been a story I’d heard from female artists over the years, of just like, you know, these gross guys kind of telling you that if you want to get your record on the radio, you know, what are you going to do for me?” she said.

“Yeah, just female artists of all genres, whether it be rock or jazz or anything, kind of being told, look, the most important thing is for you to be f—able, and if you are, you’ve still got a shot, and if you’re not, you know, forget it,” Khouri continued. “That’s so demoralizing to women.”

In “Nashville,” Alannah manages to audio record Brad admitting that if she doesn’t sleep with him, she’ll never work again, and uses that as leverage to convince Brad to sell Shiny New to Deacon (Charles Esten). She also rallies several other women that Brad harassed over the years who are willing to share their story, too.

Khouri said that while they were able to serve some justice on the show, harassment is “such a part of [female artists’] experience that it would have been wrong not to deal with it.”

With "Nashville" taking its final bow this week, here's a look back at some of the best moments from each season.

Season 1: Deacon Kisses Rayna in the Elevator
It was clear from the beginning that Rayna (Connie Britton) and Deacon (Charles Esten) were meant for each other, though it was a long road to get there. It was a gratifying moment for fans when they finally kissed in the elevator.
View In Gallery