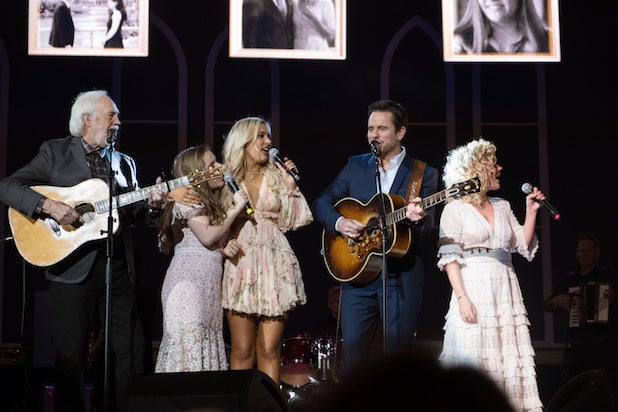 Warning: There are spoilers ahead for the series finale of “Nashville.”

You bet your sweet ass that was real, honey.

Connie Britton made an emotional cameo as Rayna Jaymes in the series finale of “Nashville” on Thursday after leaving the show in Season 5 to star in the first season of “9-1-1.” TheWrap caught up with series creator Callie Khouri ahead of the finale, who said that ending the series without its former leading lady just didn’t feel right.

“We wanted to bring her back, just because, you know, nobody felt good about ending the show without her, I think that includes her,” Khouri told TheWrap of Britton’s surprise appearance in the final moments of the series finale. Khouri added that planning Britton’s cameo was a game of will-it-or-won’t-it happen: “She was doing the other show at the time and so it was all just a matter of, like, scheduling.”

Britton appears in one of the final scenes, where Deacon (Charles Esten) is in his dressing room before taking the stage. He closes his eyes, and suddenly Rayna comes out of the bathroom, telling him “You bet your sweet ass this is real, honey, and I got the ring to prove it.”

Deacon gets confidence from the memory of Rayna, and then on stage experiences a change of heart toward his estranged father Gideon (Ronny Cox) and invites him on stage. Slowly, the rest of the cast joins them in song: Lennon and Maisy Stella, Clare Bowen, Sam Palladio, Jonathan Jackson, Chris Carmack, Hayden Panettiere and Connie Britton, along with the crew. The camera then pans out, and Khouri takes the stage to thank “The city of Nashville, the beautiful people of Nashville, this incredible cast and crew, the family that we’ve made, and may we all have a life that’s good. That’s a wrap.”

“Rayna got to do the impossible. She got to come back from the dead,” Britton said in a statement to TheWrap of Rayna’s finale return. “I got to do the most wonderful, which was to go back to my Nashville family and celebrate all the hard work and love and care that went into that show. Being on the Ryman stage, reunited with 6 years of cast and crew, is a moment I’ll cherish and never forget. I am grateful.”

“I just felt like, you know, this is a really beautiful way to say goodbye to everybody and to also thank all our fans — for everybody to get a chance to thank our fans,” Khouri said of the show’s final moments that included her own appearance. She added that the series’ fans “were the reason we lasted as long as we did.” The musical drama aired on ABC for four seasons and then moved to CMT for its final two seasons.

Although the series is over, Khouri said she hopes it leaves a lasting impression on the country music industry.

“One of the things I heard probably more than anything else was, ‘I didn’t know I liked country music.’ More people said that to me — ‘I thought I hated country music and then I saw your show, and I realized I love country music,'” Khouri said. She thinks that’s because the country music on the show was of a different genre than the pop-country “pickup trucks and cut-offs” variety.

“We were doing the kind of country music… Americana music… that [wasn’t] on the radio, that not everybody could hear unless you kind of know what to look for and listen for,” Khouri told TheWrap. “I think we just kind of put a different face on what people thought country music was.”

Khouri added that “Nashville” was female artist-heavy during a period when country music was dominated by men. It still is, though Khouri pointed out that newer female artists like Maren Morris and Kacey Musgraves are making an “impact” now.

“It was good to be able to do something that otherwise wasn’t going to get out,” she said.

With "Nashville" taking its final bow this week, here's a look back at some of the best moments from each season.

Season 1: Deacon Kisses Rayna in the Elevator
It was clear from the beginning that Rayna (Connie Britton) and Deacon (Charles Esten) were meant for each other, though it was a long road to get there. It was a gratifying moment for fans when they finally kissed in the elevator.
View In Gallery