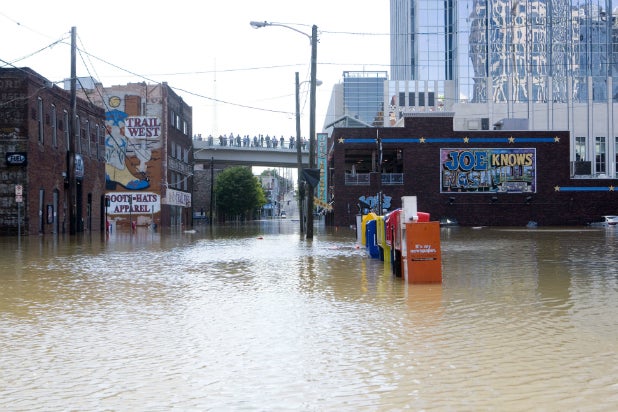 Every CMT employee is safe and accounted for in the wake of the Tennessee tornadoes, TheWrap is told. There is no damage to the company’s Nashville office building, but of the many homes impacted in the surrounding area by the storms, “a few” belong to CMT employees.

“All employees have checked-in and are safe,” a CMT spokesman told TheWrap on Tuesday night, though “a few employees reported damage to their homes.”

The CMT office building was “not impacted,” he said.

While most employees worked from home due to road closures, a “skeleton crew” reported to work on Tuesday for “business continuity reasons,” the spokesman added.

At the time this story was published, impact on show production due to the tornadoes and flooding was still unknown. “We’re sorting out the production aspects now,” the spokesman said.

A second ViacomCBS employee stressed in our conversations how grateful the team is for the “incredible” work being done on the ground in Nashville.

Along those lines, CMT is using the two below calls to actions on cable and on digital platforms:

The former Country Music Television, owned by ViacomCBS, also wants to get across the following messaging:

At least 25 people are dead after the storms ripped through Tennessee on Tuesday. The Nashville tornado was just one of three.

A state of emergency has been declared in Tennessee. On Tuesday evening, more than 47,000 customers were still without electricity, according to Nashville Electric Service.

Earlier on Tuesday, TheWrap was told that Discovery’s HGTV does not currently have any shows in production in the Nashville area.

Can the Emmys Buck This Year’s Trend of Terrible Awards Shows?
3.

Would You Pay $50 to Stream a New Movie? Over Half of Millennials and Gen Z’ers Say Yes
KEEP READING..