Natalie Eva Marie is no stranger to action, whether it’s in the wrestling ring or in front of reality TV cameras.

Natalie chatted with TheWrap about her new role and how her previous jobs helped get her into the physical and mental shape necessary for the action flick’s many intense gunfights.

Also Read: Paul 'Triple H' Levesque Tells Us How Close WWE's SummerSlam 2020 Was to Being on a Boat

While she’s used to stuntwork, firearms presented a whole new challenge — one that she wanted to ace.

“I come from a military family. My brother-in-law is currently serving in the Army right now. My dad is a Vietnam veteran who served in the Marines. The weapon training is really what I had to do and prepare before even getting to set,” the action star explained. “I was fortunate enough to train with ex-Delta Force — shoutout to James Fleming. I have just so much love and respect for our military men and women; they’re the reason why I can be in this movie. I just tried to learn as much as I could in a short amount of time to make them proud on-screen.”

One thing that surprised Natalie was how unwieldy some of the guns were.

“It’s so heavy, everything that you’re wearing,” she recalled. “It is extensive gear that is stacked up. Not only that but if you’re in the heat or you’re in the desert, all of that plays into how you are able to hold your weapon and using your weapons correctly. A lot of times in these action films, you see there’s so much ease with the weaponry when in actuality it’s heavy.”

Just like running lines, Natalie said that repetition was key to nailing down the weapons training. It also helped that her husband, Jonathan Coyle, also participated in the training. But Natalie boasted she’s the better shot. 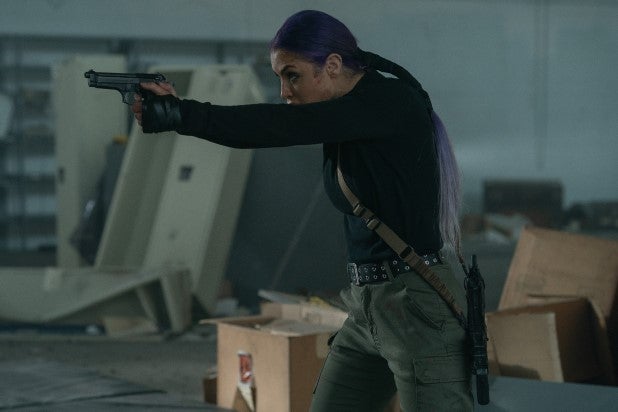 As for the hand-to-hand stuntwork, that came a little bit easier to the former wrestler.

“WWE has totally prepared me for TV and film because there are so many moving parts. With WWE, not only are you on the road for 290 days, you’re building on top of your character you’re creating, as well as performing live in front of an audience. In TV and film, you’re doing the exact same performance from multiple different angles. So walking to the set, I was super prepared because of my WWE background,” Natalie explained.

“The stunt guys were fantastic,” she added. “It’s just like WWE. The teamwork. You get a heel in your face!”

As for reality TV — Natalie starred on “Total Divas” for six seasons — that helped as well. Especially when it came to interacting with “Hard Kill” co-star Lala Kent, who appears on “Vanderpump Rules. The actresses were able to share the common bond of being on a reality show and the stresses that come with it.

When asked if Natalie would return to reality TV or WWE, Natalie replied, “Absolutely.”

“WWE is my No. 1. My home. My family. They prepared me for all the things I am doing and what I want to do in my career,” she said. “I am forever grateful to the company, to Vince [McMahon], Hunter [Triple H] and Stephanie [McMahon]. If it made sense, of course I’d come back home.”

She’s been watching as the company innovates during the pandemic and has nothing but praise. “The programming is sick!” she said. “It’s actually so cool, the virtual dynamic they’re doing and that 3D vibe on entrances. It’s been really engaging.”

As for Natalie’s signature bright hair color, which is lavender in the film and hot pink for the interview, that was her personal choice.

“For my first film [“Inconceivable”] I had bright red hair from WWE. When I went in for my audition, I spray painted it back because sometimes it’s difficult to see past a hair color. And for the character, it made sense for her to have a ‘natural’ hair color. For this film, my hair was purple and it wasn’t an ‘eye grab’ so they let me keep it if it worked for my character.”

You can see Natalie in “Hard Kill,” available on-demand now. Check out the trailer below: