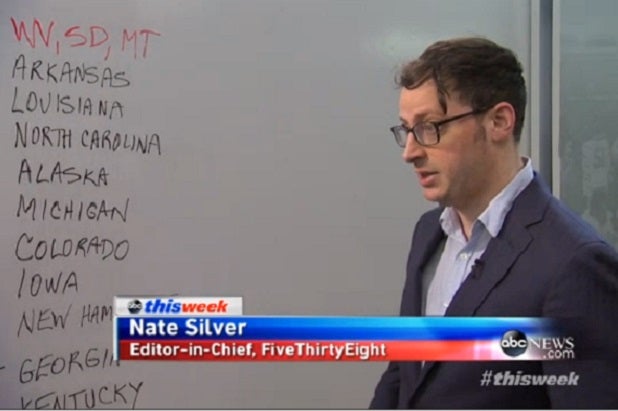 Nate Silver, the stat guru who gained fame by correctly predicting every state in the 2012 election, chimed in on the 2014 mid-term elections Sunday. It’s not good news for the Democrats — Silver gives Republicans a 60 percent chance of retaking the Senate.

Silver, who recently launched the web site FiveThirtyEight via ESPN, made his comments to ABC’s Jon Karl on “This Week With George Stephanopoulos” on Sunday morning.

He said his best projection saw the GOP taking six seats, the number they’d need to claim a one-vote majority. And he gave Republicans a 30 percent chance of taking even more spots.

But he left himself plenty of room for error, saying the number had a plus-five or minus-five margin of error. That means the Republicans could gain 11 seats — or just one, in which case the balance of power would remain unchanged.