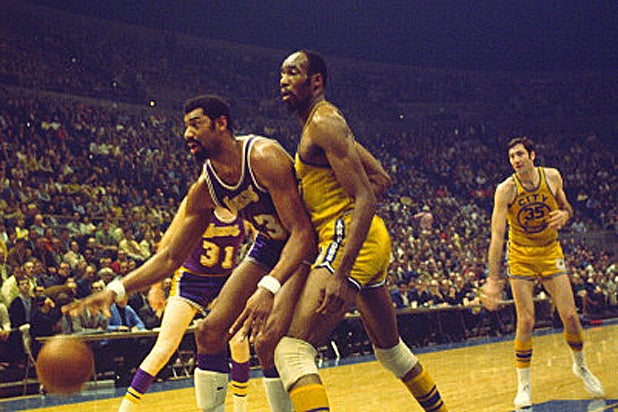 Nate Thurmond, an NBA legend who played for the San Francisco then the Golden State Warriors, has died. He was 74.

The seven-time All-Star and first player in NBA history to record an official quadruple-double was recently diagnosed with leukemia, according to NBA.com.

Thurmond (above right with Wilt Chamberlain in 1971) was voted one of the 50 Greatest Players in NBA history for his record-breaking 14-year career in the basketball league.

Considered one of the best centers to ever play , Thurmond was inducted into the Naismith Memorial Basketball Hall of Fame in 1985. His Warriors jersey #42 was retired on March 8, 1978, an honor he shares with only five other players.

“We’ve lost one of the most iconic figures in the history of not only our organization, but the NBA in general, with the passing of Nate Thurmond,” Warriors owner Joe Lacob said in a statement Saturday.

“Nate represented this franchise with class, dignity and humility as both a player and community relations ambassador for over 40 years. Without a doubt, he is one of the most beloved figures to ever wear a Warriors uniform and both a Hall of Fame player and Hall of Fame person, hence his #42 jersey hanging from the rafters at Oracle Arena,” he continued.

“We’ll miss his presence in his customary seats at our games next season, but his legacy will live forever.”

Lakers legend Magic Johnson also honored the former player. “Rest In Peace to Nate Thurmond, one of the best that’s ever played in the NBA. My prayers and best wishes go out to his family,” he tweeted.

Jerry West, who now works with the Warriors as an executive board member, called Thurmond “without a doubt, one of the fiercest competitors that I played against during my entire career.”

Born in Akron, Ohio, Thurmond played college ball for Bowling Green before being drafted by the San Francisco Warriors in 1963, playing opposite Chamberlain. He went on to play for the Chicago Bulls and ended his illustrious career with the Cleveland Cavaliers in 1977.

After retirement, Thurmond returned to San Francisco and opened a restaurant, Big Nate’s BBQ, after a brief attempt at broadcasting.

Thurmond is survived by his wife, Marci.

Rest In Peace to Nate Thurmond, one of the best that's ever played in the NBA. My prayers and best wishes go out to his family.