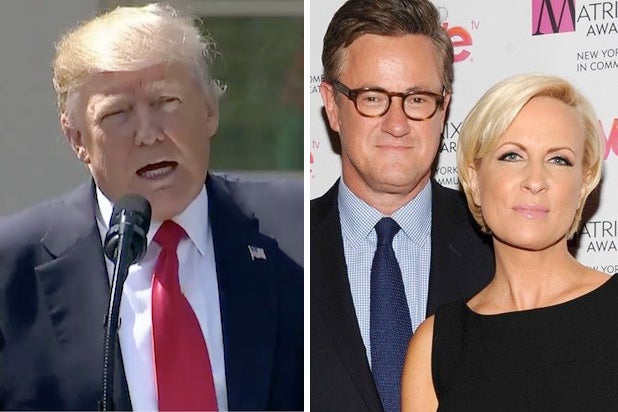 The National Enquirer has denied claims by “Morning Joe” co-hosts Joe Scarborough and Mika Brzezinski that the White House attempted to blackmail the morning show duo with a possible hit piece that involved going after Brzezinski’s children.

“This year, top White House staff members warned that the National Enquirer was planning to publish a negative article about us unless we begged the president to have the story spiked. We ignored their desperate pleas,” Scarborough and Brzezinski wrote.

On Friday’s “Morning Joe,” Brzezinski called it “blackmail. “And let me explain what they were threatening,” she said. “They were calling my children. They were calling close friends … And our response talking to my ex-husband and Joe and my kids was screw it, let them run it. Go ahead and run it, we’re not calling.”

America Media (which owns National Enquirer) COO Dylan Howard responded in a statement: “At the beginning of June, we accurately reported a story that recounted the relationship between Joe Scarborough and Mika Brzezinski, the truth of which is not in dispute. At no time did we threaten either Joe or Mika or their children in connection with our reporting on the story. We have no knowledge of any discussions between the White House and Joe and Mika about our story, and absolutely no involvement in those discussions.”

The Washington Post column was in response to Trump saying Brzezinski was “bleeding badly from a face-lift” in a personal attack during a Twitter tirade on Thursday. Trump doubled down on Friday, tweeting that Scarborough called him to stop the National Enquirer article.

Watched low rated @Morning_Joe for first time in long time. FAKE NEWS. He called me to stop a National Enquirer article. I said no! Bad show

Also Read: Enquiring Minds Want to Know: Why All the Trump Propaganda in the National Enquirer?

However, Scarborough quickly responded and claims that he has texts and phone records to prove his point.

Yet another lie. I have texts from your top aides and phone records. Also, those records show I haven't spoken with you in many months. https://t.co/TZWiElo6Gs

Why do you keep lying about things that are so easily disproven? What is wrong with you? https://t.co/aAoUj5HYZS

NBC News communications executive Mark Kornblau hinted on Twitter that he had Scarborough’s back and the “Morning Joe” namesake explained that he was updating NBC in real time.

“NBC execs knew in real time about the calls and who made them to me,” Scarborough told RedState. “That’s why Mark Kornblau wrote about contemporaneous texts. I showed him and executives as they were coming in to keep them advised.”

It is well known that Trump is friends with the Enquirer‘s chief executive, David Pecker and Trump has endorsed the publication during his speeches. The supermarket rag has become Trump’s cheerleader-in-chief, while simultaneously churning out a stream of hit pieces about his rivals.