In February 2015, four months before Donald Trump announced his bid for the White House, the National Enquirer gave him a ringing endorsement: “NEW POLL: DONALD TRUMP’S THE ONE!” the tabloid proclaimed in all-caps.

“The National ENQUIRER can reveal that the billionaire businessman – and star of NBC’s “The Apprentice” – is meeting with Washington, D.C., insiders clamoring for The Donald to take on expected Democratic front-runner Hillary Clinton in the race for the White House!,” the story went on to say.

Since then, the supermarket rag has become Trump’s cheerleader-in-chief, while simultaneously churning out a stream of hit pieces about his rivals. The Enquirer’s stories may not be true, but it has a platform many news outlet would envy: Checkout aisles across America it uses as a bully pulpit to shout bullet points at captive shoppers.

During the campaign, the Enquirer dropped several shockers with dirt on Trump’s rivals, touted as “exclusives.” Jeb Bush used to do coke; Hillary Clinton had multiple sclerosis and suffered a series of strokes; Ben Carson botched his surgeries; and Ted Cruz had five mistresses.

But Trump conspicuously escaped the Enquirer’s digs. When the tabloid finally delivered an “investigation” into Trump’s “secret psychological evaluations,”  it revealed that he had… wait for it: “the mind to be a great president.” 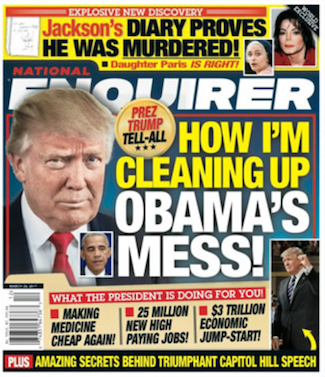 To get a feel of just how positive the tabloid’s Trump coverage is, one needs to look no further than the publication’s recent March 8 cover, which featured the headline: “How I’m Cleaning Up Obama’s Mess!”

Splattered in bold yellow letters, it was accompanied by a series of bullet points neatly placed under the sub-head: “What the president is doing for you!”

Even though Trump reluctantly admitted in September that President Obama was in fact a U.S. citizen, the Enquirer was still peddling the so-called “birther” conspiracy theory as recently as this month. On March 10 the tabloid ran a story titled,”Barack Obama Kenyan Birth Certificate –Exposed.”

Three days after FBI Director James Comey stated unequivocally that “the FBI and the Justice Department have no information to support” Trump’s assertions that Obama tapped his Trump Tower phones, the Enquirer insisted it had “Proof Barack Obama Wiretapped Trump!”

And then of course, there’s the whole affair cover-up thing. In the days leading up to the election, the Wall Street Journal reported that the Enquirer paid a former Playboy model $150,000 in order to kill her story about an alleged affair she had with Trump.

Critics note that Trump is friends with the Enquirer‘s chief executive, David Pecker. And Trump has endorsed the publication during his speeches.

But the tabloid’s editor in chief, Dylan Howard, told TheWrap in a statement that the Enquirer is “extraordinarily proud of our investigative political reporting and the legion of new readers that have turned to us since we entered the fray as a national political voice.”

The company dismissed Media Matters as the “epitome of partisanship,” insisting that “The New York Times even reported it ‘helped lay the groundwork for Hillary Clinton’s 2016 campaign’ — so it is a delicious irony that they have chosen to criticize The ENQUIRER because it correctly endorsed President Trump.” Howard’s full statement is below.

Last year, Pecker told the Daily Beast that the Enquirer’s coverage “reflects what its six million readers want, and expect, from the publication which has shown no hesitation in presenting an unvarnished look at past or current candidates for president.”

Six million readers would place the Enquirer above recent circulation numbers for major papers like USA Today, The New York Times and the Wall Street Journal. But Pecker isn’t talking about circulation.

But the tabloid’s influence extends beyond its direct readership. The publication’s biggest asset is its supermarket placement.

“The power of the National Enquirer isn’t just their paid number of readers,” marketing expert and founder of the the Brand Identity Center Chad Kawalec told TheWrap. “It’s the millions of organic eyeballs that read its cover as they’re standing at the neighborhood grocery store checkout line.”

American Media Inc., which publishes the Enquirer, also owns other outlets, including Radar Online and its most recent acquisition, US Weekly, which it bought for a reported $100 million from Wenner Media earlier this month.

Not surprisingly, Radar has been showing similar pro-Trump undertones. The site was quick to discredit the now infamous Trump dossier alleging that Russian officials had compromising information about the president, declaring the reports a “Forgery!”

According to the Enquirer’s 2016 media kit, AMI’s magazines have a combined total circulation of more than 2.1 million and reach more than 35 million men and women each month.  AMI’s digital properties reach 50 million unique visitors and 400 million page views monthly. And that’s before the US Weekly acquisition.

Media watchdogs worry Trump’s team may be planting favorable articles in tabloids and gossip sites known for their impressive reach. As theWrap previously reported, Hollywood gossip site TMZ has also been criticized for pushing favorable Trump coverage, a move which has many of the site’s own staffers feeling “uncomfortable.”

“You find an outlet or an influencer that has sufficient traction with the right audience that you’re trying to manipulate and you start the story there,” Carusone said. “That can have a big effect on the conversation.”

The Enquirer has undoubtedly landed some major scoops, effectively ending the political careers of John Edwards and Gary Hart. But critics argue that, like TMZ, it snagged many of its exclusives by paying sources for tips, a practice that’s frowned upon by reputable news outlets.

As Al Tompkins, Poynter Institute’s senior faculty for broadcasting and online, told TheWrap recently: “When you pay, you encourage people to overstate what they know.”

Positioning the tabloid as a pro-Trump publication can result in better access to the administration. But it could also be a very lucrative business strategy, considering almost half the country voted for Trump.

“It’s very obvious here if you turn yourself into a sycophantic publication you’ll get access,” Carusone said. “But to get to that next level you have to be willing to participate in their machinations.”

“You need to be willing to push their narrative,” he added.

You can read the Enquirer’s full statement to TheWrap below.

“In repeated surveys and polls, the readership of The National ENQUIRER told its editors they wanted to learn more about Donald Trump than any other 2016 candidate, and that demand has only increased since the President was elected.
The ENQUIRER’s political reporting has clearly delivered something that was missing in the media landscape as evidenced by our 12% gain in readership with the vast majority of that new audience coming from the 18-34-year-old demographic.
We are extraordinarily proud of our investigative political reporting and the legion of new readers that have turned to us since we entered the fray as a national political voice.
Media Matters is an organization that is the epitome of partisanship — The New York Times even reported it ‘helped lay the groundwork for Hillary Clinton’s 2016 campaign’ — so it is a delicious irony that they have chosen to criticize The ENQUIRER because it correctly endorsed President Trump.
Media Matters and almost every other pundit, pollster, and member of the press continue to deflect their embarrassment of getting the election horribly wrong.”