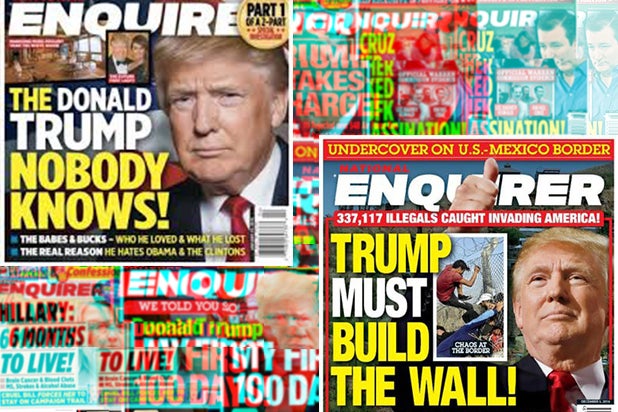 The National Enquirer kept damaging stories about Donald Trump as well as documents relating to hush money payments to women in a locked safe leading up to the 2016 presidential election, The Associated Press reported Thursday.

The safe also contained documents from “catch-and-kill” stories about other celebrities, a practice in which rights to stories are bought and then buried.

The news comes as The Wall Street Journal and Vanity Fair reported Thursday that federal prosecutors had granted immunity to American Media Inc. (which published the Enquirer) chief David Pecker in exchange for information about his close relationship with Trump during the 2016 presidential race.

On Tuesday, Trump’s longtime personal lawyer and fixer Michael Cohen, pleaded guilty to campaign finance violations, telling the court he coordinated hush money payments to Playboy Playmate Karen McDougal and adult film actress Stormy Daniels in order to buy their silence about sexual encounters they say they had with Trump before he became president. Cohen said he did at the direction of the president.

According to the AP, the safe was “a great source of power for Pecker,” because it held celebrities’ “embarrassing secrets,” which the Enquirer was able to use as leverage. But the safe was removed from its location after the WSJ published a story about Trump’s hush money payment to McDougal in 2016, according to the AP.

It’s unclear whether the documents have been destroyed or just moved to a different location.

American Media did not immediately respond to TheWrap’s request for comment.