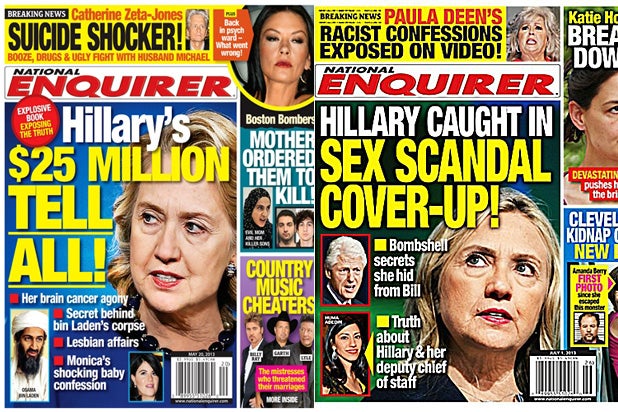 MSNBC anchor Rachel Maddow spent a large chunk of her show on Thursday night examining National Enquirer covers — not for celebrity gossip but to comment on how far the tabloid goes to boost Donald Trump and slam Hillary Clinton.

“It was the supermarket tabloid the National Enquirer that broke the news a couple of months ago that Hillary Clinton had been caught on camera having a seedy romp at this motel,” the “Rachel Maddow Show” host said, displaying a past issue.

“The National Enquirer broke that news the week of the election. They had a quite a few scoops in that cover … apparently Hillary Clinton is gay … and hooked on drugs … and blackmailed the FBI,” she marveled. “That’s a lot of news on one $1.95 cover!

“Leading up to the election, it was quite something else — we are used to the National Enquirer being celebrity divorces, who’s too fat, who’s too skinny, and everyone is always on the brink of dying,” Maddow continued.

But starting this past summer, in the heat of the general election, the tabloid “stopped what it was doing and became full time, full bore this,” she said, displaying a cover with a photo of Clinton and the headline “CORRUPT!”

Also Read: Donald Trump Comes Out as 'Big Fan' of US Intelligence While Ripping 'Dishonest Media'

By the following week, Clinton had “gained 103 pounds and was eating herself to death,” according to the magazine. A couple of week’s later they reported she would be dead by election day, along with a very corpse-like image.

“She’s probably already dead. They had to dig her up to take that picture,” Maddow quipped.

“It’s just a firehouse of this stuff, mostly it is just unbelievable hit stuff on Hillary Clinton,” the MSNBC host critiqued.

At the same time, there was also a flood of pro-Trump Enquirer covers, such as one proclaiming that he did release his tax returns  — and is worth $10 billion.

“Supermarket tabloids being weird, outrageous or fantastically false is like reporting that the sun rises in the east,” Maddow said. “But with the National Enquirer specifically, there is something going on here. All that stuff was leading up to the election.”

However, since the election it has been covers such as “Trump takes charge: Success in just 36 days.”

“It seems that this is a new Trump news outlet indefinitely,” Maddow said.

Her analysis comes after the Wall Street Journal reported in November that the Enquirer quashed a story about  Trump having an affair with a Playboy model.

The Journal said that the National Enquirer parent company, American Media, agreed to pay Karen McDougal $150,000 for a story regarding a decade-old relationship with Trump, who at the time was married to his current wife Melania, but never published the piece. American Media denied paying McDougal, the 1998 Playmate of the Year, for the Trump story, but instead said it paid her for a series of fitness columns and magazine covers.

In a statement to the Journal at the time, American Media CEO — and longtime Trump friend — David J. Pecker defended the Enquirer’s coverage of Trump, saying the paper “set the agenda” on Trump’s extramarital relationship with Marla Maples.

After detailing the Trump administration’s upcoming media strategy, Maddow culminated her segment Thursday night by displaying yet another anti-Clinton cover and warning viewers: “This is part of what they are doing, expect anything.”